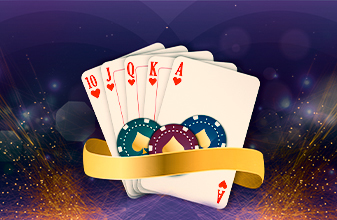 In the Reno area, there is no way to avoid constant attention, if not heat, with blackjack at the black-chip level. I’ve found a style of betting at the single decks in Reno and Wendover that is good for keeping the welcome mat out. Depending on what the bottom card is (viewed as I cut, by a hopefully undetectable motion of arm and wrist), I play what I hope will be perceived as either a “casual” or “hunch” deck. If I see a 3, 4, 5, or 6, I play a hunch deck; with any other card on the bottom, I play a casual deck.

A hunch deck starts with three hands, each bet at the maximum. Sometimes the bets are graduated, $300 on the first hand, $400 on the second hand, and $500 on the third, so I look like an idiot to the pit. My attention is rapt. I sustain this betting level for three rounds if I maintain an advantage, however slight. If I lose the advantage, I immediately cut back to one hand of $100 or $200.

A casual deck begins with one hand of $100, and I try to appear to be only slightly interested, chatting to anyone who will listen. If the count warrants it, I might progress to higher bets.

I thus get a large bet spread, although with high variance. I have found the fluctuations frightening, but the win rate has been large. I always seem to get the seal of approval from the pit bosses for this style of play. Even if nervously, they comp me to the hilt.

This is an explanation of the “hopefully undetectable motion of arm and wrist” I mention in my first paragraph: The deck is best situated at an angle of 45 degrees to a line drawn between the dealer and me, with the tilt going NW-SE for a right-handed cut, or NE-SW for a lefty. I lift the cards off towards the dealer, maintaining the 45 degree angle of the deck as it sits on the table. I lift the cards several inches. At the top of the parabolic motion of cards from deck to table, a slight rolling motion of my wrist enables me to catch sight of the top right corner of the bottom-card-to-be. I perform the whole gesture quickly and with panache, so the peek should be undetectable.

Another tip: When wonging, I try to approach a table just as the deck is being cut. I often glimpse either the bottom card or the burned card, and so pick up a little extra knowledge.

During a long New Year’s weekend, the main pit at Caesars Palace in Las Vegas was all $100 minimum or higher tables, you could not ask for a marker of less than $1000, and purple chips were common. One lady played yellow chips each night at a reserved table and began each session by asking for a rack of chips, which, in this case, was $100,000. At another table, one of the highest rollers in Caesars’s history was back in town after a three-year absence. He had lost millions at Caesars and the pit was buzzing in anticipation of his play. Throughout the casino, the floormen watched all the play with their customary detached, vacant stares as if they did not know which $1000-a-hand player to observe first. During the week prior to New Year's weekend, I played with the kind of card counter I personally dislike.

He would bet $25 or $50 on bad counts and then suddenly, without any attempt at camouflage whatsoever, spread to two hands of $300 or $400 on high plus counts. He never spoke, never smiled, never tipped, never lifted his eyes from the table, and played for nothing but cash. He played with absolute impunity for the entire week, back-counting tables in the main pit to his heart’s content, and never once received so much as a single word of admonition from the pit.

Heat is when the floorman turns his back on the game and talks surreptitiously to the dealer. Heat is when the shoe is suddenly cut in half and/or shuffled before the stop card is reached. Heat is three bosses converging on your table, where one watches from first base, one from third base, and one leaves the pit to stand behind you! Heat is when you get up and move across the aisle to another pit and that floorman is already on the phone talking to the one you just left before you sit down at the new table.

Wong says: My definition of heat is different from Schlesinger’s. I try to be sensitive to the times when the bosses are saying to each other, “He is winning, so he must be doing something to get an edge. Let us figure out what he is doing.” So to me, heat is any attention I receive that is excessive considering my bet size. I may keep playing rather than leave when that happens, but that still is what I would call the onset of heat.