Do you look "shady" to casino employees? 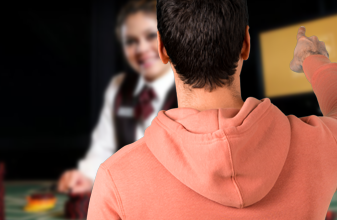 The pit and the eye in the sky are watching for many things, not just card counters. Do you look like the stereotype of a bet capper, mucker or other cheater? If you are giving off signals that you might be “up to something,” a casino may assume you are cheating and give you unwanted attention.

When they determine you are “only” counting cards, they may be relieved, but you'll probably still get backed off. They won't exert all that effort for nothing. In the eyes of the casinos, card counters are parasites and we are often treated no better than shoplifters. I have never been employed by a casino, and I'm not an expert on their security and countermeasures, but in my twenty years experience in retail I have dealt with my share of shoplifters, thieves and cheats. I can tell you how the ones I caught behaved, so that you will not invite the suspicion of the casinos by accidentally looking like a thief.

The behavior of thieves

The range of behavior for legitimate customers is far wider, but thieves will generally fall into the categories below.

Wallflowers: A little more open than Skulkers, they just seem shy or self-involved.

Clark Kents: Polite, but a minimum of contact and conversation.

Introverted types just want an opportunity to make their move unnoticed. The introverts mainly drew suspicion from their lack of desire for attention, especially over a period of time. The Wallflowers got away with it the longest because they didn't stand out and appeared the most normal in behavior.

Salesmen: Demand eye contact. Come on strong, seem to want something. Attempt to steer you.

Obnoxious Jerks: You'll wonder right off if this type is drunk or has a manners deficit or both. Loud and demanding. Never listen for their question to be answered before asking another one.

Extroverts want to be noticed and then dismissed as harmless. Sometimes they were just providing a distraction for another thief. The Salesmen came on so strong that you'd want to retreat. The Jerks would try to lay down so much noise that you wouldn't know what they were up to.

Some of these thieves had a pretty good act and were able to make numerous return visits while being welcomed. Not everyone was caught of course, but some of them unwittingly exposed themselves. One of the behaviors that gave the thieves away was just acting “suspicious”: nervous, twitchy or tense.

When making their entrance they started casing the place in a predatory manner, deliberate and determined. They would spend way too much time watching the to see if they were being watched instead of going about their business, and they sometimes ”just didn't fit in” -- in casino parlance, “just doesn't look right (JDLR).” Sometimes the Skulker is watched because he might be a nut with a grudge and a gun. The biggest giveaway in any of the types was a sudden change in behavior, often a switch from one type to the other They make their move and then they feel the need to cover it up or explain their behavior, but they just call attention to themselves.

An example of this in casino play might be when the count goes up, a quiet counter suddenly raises his bet, saying to the dealer something like, “I'm feeling lucky now, I sure hope this works out! Give me two Queens! Better yet a Queen and an Ace!” Suddenly the Skulker is a chatterbox or the Obnoxious Jerk won't make eye contact. The extroverts mainly gave themselves away by trying too hard to be your buddy; the introverts just looked too spooked when approached. Another giveaway was seeing the same customer too often for no good reason. He'd overstay his welcome or visit too frequently.

Thieves get jailed, counters and other advantage players get backed off or barred, so the comparisons here are less useful. When caught or accused, almost all thieves deny and protest. They will certainly lie and assert their innocence, claiming they are being wrongfully accused and get indignant at the assault on their character and honesty. Strangely, innocent people are more tolerant of accusations. They may get angry, but they are determined to clear things up (without hysterics). The guilty are afraid of the consequences, the innocent usually are not.

Of all the thieves I encountered over the years, the most successful by far were the Buddies. They behaved the most like normal people, and due to them being perceived as normal customers, they were welcomed and were given the benefit of the doubt (if ever suspected). They would be patient and cunning, sometimes building up a relationship and trust before making their move. Also, the good ones drew less attention by not being too greedy. When there was too much loss, everyone would come under scrutiny and the best Buddies would back off. The worst of it was when a Buddy was revealed as a thief, it became personal, a betrayal of trust. The hammer would come down harder on them than other types.

When you are at the casino waiting to pounce on a high count, Wonging or trying to rathole some chips, be careful not to look “shady.” Blend in with the crowd, appear relaxed and don't let a little heat spook you.