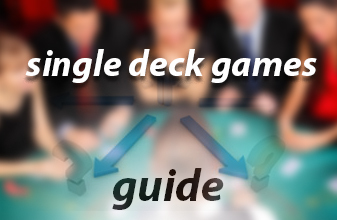 This is presented as a general guide, primarily to assist players who may not be accustomed to single-deck games. Using the summary at the end of this presentation, such players will be able to quickly determine under which conditions a single deck game is worth playing, and which conditions to avoid.

No attempt is made to differentiate between various rules, such as d10 ("Reno rules"). We will deal only with the number of players present at the table and penetration, with the results reduced to simple conclusions and recommendations.

Some single-deck games are Ro7. Unfortunately, Ro6 is the more common. The difference is significant. In heads-up play, however, many dealers will deal more than the specified number of rounds. In many otherwise Ro6 games, a heads-up player will receive 6 or even 7 rounds. In a few single-deck casinos, Ro5 is used. Such a game is a total waste of time, and shouldn’t even be considered.

In heads-up play, the dealer will bust less than when there is more than one player. This is because when the heads-up player busts, the hand is over, and the dealer does not get the opportunity to bust. This slightly reduces the average number of cards per hand in a heads-up game. The difference is negligible, though. For this analysis, we’ll use the generally accepted “average of 2.7 cards per hand.”

6/5 "blackjack" (single deck or otherwise) should be avoided by everyone except those few with particular skills that are well beyond the scope of this article. Possibly with very deep penetration (perhaps 8 rounds heads-up?) and casino tolerance of a huge bet spread, 6/5 could be beaten. But such conditions are unlikely to be found, and searching for them is probably going to be a waste of time.

8 rounds -- an excellent but rare game

5 rounds -- a poor game. If you are faced with this game, play two hands. You will normally get 4 rounds to 2 spots under Ro6, which is playable. You can drop to one hand in negative decks. You may get lucky and get 5 rounds to 2 spots, which is an excellent game.

You and only one other player at the table, playing one spot each

You and two other players at the table, playing one spot each

3 rounds to 3 spots (Ro6) -- a poor game. Your hands per hour will be greatly reduced, and you will frequently have to go directly from minimum bet on Round 2 to maximum bet on Round 3, making the bet variations severe and quite obvious. If the game has side bets, such as Royal Match, expect the ploppies to slow the game down even more.

Unless you are betting in black units, the “3 rounds to 3 spots” game will not be sufficiently profitable to be worth your time. If you’re at a table with only one other player, and a third player joins, take a restroom break, and hope one or both have left the table by the time you return. If it appears that both other players will be there for awhile, look for better conditions elsewhere.

With you and three or more other players at the table, in most cases single-deck games are a waste of time. Once in a while you will see 3 rounds to 4 spots (Ro7), but the same problems as the “3 to 3” game will be present. Also, in such a game, frequently in high counts, you will not get the third round, because the dealer may fear running out of cards and may shuffle instead.

You and one other player

You and two other players

You and three or more other players

There may be disagreement from some experienced single-deck players on my recommendation to not play “3 to 3” or “3 to 4”, but I believe for the vast majority of players who don’t play single deck regularly enough to accurately judge game speed, the advice to “not play” is superior to “play” in these marginal situations.

Are the dealers instructed to deal Ro6, Ro5, etc?

I always thought that dealers were instructed to deal a certain percentage of the deck, or instructed to not run out of cards. In some casinos, certain dealers definitely deal deeper than others. Are they sloppy or are they given discretion subject to player skill, etc? Or, do they know the pit isn't watching?

It varies by casino and sometimes even by shift and pit supervisor; there is no absolute answer.