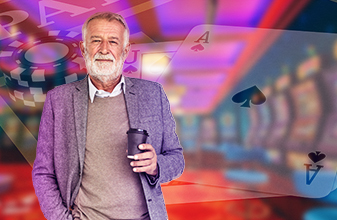 As I contemplate retirement, I want to thank all the players who made my game better through the years. I learned card counting years before joining Green Chip; however, a few tricks came from the great people here. Knowledge of true facts about counting should come from reading and practice for all new players before they even go into a casino.

Being a card-counter catcher in the casino has led me interesting experiences such as meeting true professional counters, new counters, team players, hole carders, and a variety of other interesting people. I've caught many and the best feeling is backing them off, authorized by my boss's decision.

Perusing BJ21.com for insight has gained me knowledge of what to expect during a work week, or the next day for that matter. This board will throw me a couple of questions, so I'll give you a little detail about my typical day:

I work as a card-counter catcher on scheduled days. I check who is playing, or who played. I police all high limits and count down anybody I don't know. I check all green-chip action and above for large swings. I also run down any green player I don't know. I always run down a new player or players that don't get rated. I catch people when I'm running other people down, too.

Mr. Gone, from the Great Casino Beyond: Call me if you need a job in downtown Las Vegas. We know who the counters are -- they are the ones who leave my casino with some of my money. It's a good idea to have our employees learn to count cards. Then it's easier to recognize the other counters. (Giveaways like counting on their fingers, lol.)

You have the right attitude for a pit person. Smile at the ploppies and addicted gamblers while we take their money. You should probably have stayed on the website for a while and made some positive posts about 6:5 and progressions. Drive these guys nuts.

Good work from the Casino Brotherhood.

LV Bear: Casino Lifer wrote: “I've caught many and the best feeling is backing them off, authorized by my boss's decision.”

"Caught" implies that brain-using patrons are doing something wrong. You actually feel good about throwing someone out for using their brain? You feel no remorse or guilt about working for a greedy entity that's likely a lousy corporate citizen, pays you a meager salary and probably cares no more about you than it does about its patrons?

I have always wondered how “casino lifers" feel about themselves. I assume depression and low self-esteem must be widespread, along with alcoholism and drug abuse. It would be interesting for many of us to hear your tales from the dark side.

Casino Lifer: I know somebody counting hasn’t done anything wrong. They are skilled in the sense of using information that any ploppy could for a couple of hundred dollars or less in a few good books -- why waste thousands or tens of thousands on paid lessons? Or for the simple matter of finding relevant websites and reviewing information to gather a better understanding of the game -- who buys a car without some sort of information about different kinds, gas mileage, and warranty?

When I catch somebody, I really feel good. However, I have admiration for the person and the ability they possess to obtain an advantage.

Depression, drug use, and alcoholism are found in every industry and are not automatically associated with casino work. The casino industry is growing, as America moves away from the auto industry and other manufacturing. I might be shooting in the dark when I say this, but everybody knows somebody in auto, and we all know what abuses those workers carry along with body aches and pains.

I don't feel any remorse about backing people off. I’m paid to do a job that I would otherwise spend more hours at then I currently do to obtain lesser pay.

Handymn: I'm disappointed but not surprised. You indicated that your "best feeling" was when you back off an advantage player.

I had hoped, although rather unlikely, that instead of kicking out people who use their brains, your best feeling would be something along the lines of counseling a compulsive gambler on not throwing away her life or looking for and finding people who are on a self-exclusion list and kicking them out -- doing something that you know results in some good in people's lives.

There have to be other things in your job satisfaction that should rank above the feeling of authority and control that you get by kicking out a winning patron, while at the same time feigning happiness to a ploppy who hits a blackjack. Alas, what you have said unfortunately more approximates what I have expected from casino personnel.

Totally agree with Handyman ...
This Pit Critter Enjoys backing off Someone who uses their Brain How many in his career have taken their Life’s because he is a Casino Lifer and Never Stopped THEM because he Does the Right Thing ???