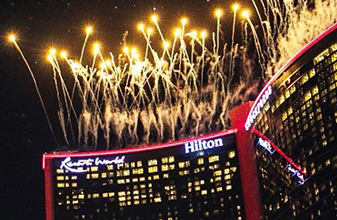 Resorts World Las Vegas recently opened in Las Vegas with a spectacular grand opening. For skilled blackjack players, the opening might as well have been a giant “thud.”

The newly-completed facility had an estimated 20,000 people at its recent grand opening, and many tourists were pleased with the resort’s offerings. The hotel-casino, which is owned and operated by Genting Group, headquartered in Malaysia, is the first newly-built hotel-casino to open on the Strip in over a decade.

Scott Sibella, president of Resorts World Las Vegas, said, “Opening the first resort development on the Strip in over a decade has been a monumental achievement and the night exceeded our expectations.” While most of the revelers seemed to agree, some notably did not.

A local advantage player, Wesley, decried the lack of interesting amenities. He said, “The only thing there really worth seeing is the display of Rolls-Royces.” It’s unknown if the luxury classic cars will remain on site. Most had Florida license plates, so speculation is that they’ll be returned to Florida in the near future. Sibella did not comment on it.

Wesley went on to ridicule the “large chrome ball” that he said has no worthwhile purpose, possibly only good for taking selfies. To him, it was reminiscent of the big blob that used to be in front of the failed SLS, which has now been rebranded as the Sahara, its original name.

Several attendees commented that the exit from the main parking garage is directly next to Sapphire, a “gentlemen’s club,” departing the resort property onto a street lined with other such businesses. Blackjack advantage player Rebecca C, a resident of Marina del Rey, California and frequent Las Vegas visitor, noted the wry product association of the strip clubs with one of the resort’s bars, the Here Kitty Kitty Vice Den.

Others commented that the facility appeared to be opened “on the cheap” with the landscaping not being finished and large patches of dirt visible throughout.

The resort has mostly “Brand X” eateries, many of them geared towards the Asian market, its primary audience. Nevertheless, others complained of the lack of a recognizable 24-hour coffee shop. There appears to be only one, called The Kitchen. A pizzeria supposedly is “coming soon.”

Blackjack players overall were the most vocal critics, noting the general decline of blackjack in Las Vegas, particularly among the Strip properties. According to Current Blackjack News as well as personal observations of card counters, the blackjack presented by Resorts World Las Vegas is essentially unplayable pseudo-blackjack, either the 6:5 blackjack-based game, or games dealt from continuous shuffling machines. The only worthwhile blackjack games are a few attractive six- deckers dealt from normal shoes, offered with minimums ranging from $100 to $300, depending on the time of day and day of the week, with a healthy posted maximum of $10,000. It’s unknown yet if play anywhere the limit would be tolerated for long before backoffs begin.

By contrast, other recently-opened properties Circa and Mohegan Sun Las Vegas, feature at least a few playable games, even including a handful of double-deck offerings. Overall, reflecting the general deterioration of blackjack in Las Vegas, it appears that offering reasonable blackjack is no longer a selling point for operators of casinos catering primarily to tourists.