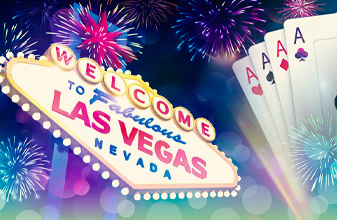 A typical New Year’s Eve in Las Vegas would be a textbook case on what not to do during a pandemic.

As previously discussed on these pages, many casino critics and patron advocates are recommending that there should be another mandated closure of Nevada casinos. But visitors are still coming in droves, so it is nearly impossible to get the pandemic under control in Nevada. As would be expected, things are worse in Las Vegas and Reno, where a hospital parking lot has been turned into a 700-bed COVID-19 unit. Yet Gov. Steve Sisolak has done little compared to his appropriate action at the beginning of the pandemic.

Sisolak continuously faces intense pressure from competing interests, and still has no help from the U.S. federal government under the outgoing administration. The lack of cooperation from the casino industry has been obvious, and enforcement from the Nevada Gaming Control Board is weak, as is normal.

Most card counters and other types of advantage players normally avoid Las Vegas around New Year’s Eve because of the overcrowding, but this year may offer some opportunities to those who are willing to risk entering casinos during the pandemic.

Last year, officials estimated that over 300,000 visitors packed Downtown Las Vegas and the Strip for hours in tightly-packed crowds. While pandemic conditions should greatly reduce those numbers, the question remains whether mitigation plans will allow people to safely celebrate outside of their homes.

“The answer, sadly, is no,” said Dr. Amber D’Souza, an epidemiology professor at Johns Hopkins. “No one right now should be doing non-essential travel, interstate, to get together in a large group. That is one of the riskiest things you can do.”

But local tourism officials maintain “Vegas is open” and safe to enjoy. “Is it for everyone right now? No, but it is available for those who do want to travel,” Las Vegas Convention and Visitors Authority spokeswoman Lori Nelson-Kraft said. “I believe people are still coming here to celebrate, but they’re going to celebrate in a much more intimate fashion.”

Gov. Sisolak tweeted a reminder that residents should avoid large gatherings and stay home when possible. Last month, the governor urged residents to voluntarily stay at home but under apparent pressure from the casino industry, encouraged visitors to continue traveling to the state. “You’re walking on the edge of a knife trying to balance the economy and at the same time a health care system that is being burdened heavily,” Sisolak said earlier this month.

Public health officials have also avoided telling visitors to stay home, but this week they encouraged tourists and residents alike to carefully weigh what risks they take while celebrating. “The trend is so high in our nation, you just need to assume that the people within the proximity around you are positive,” Nevada Department of Health and Human Services deputy administrator Julia Peek said.

It’s already certain that New Year’s Eve will look remarkably different this year. Several major events have been cancelled. Nightclubs have been closed for months. Restaurants can’t seat more than four people to a table. Public events with more than 50 people in attendance are prohibited, and private gatherings are limited to 10 people from no more than two households.

Local government officials say COVID-19 has changed business-as-usual to the point that it’s impossible to estimate how many tourists will actually show up this year.

However, it's entirely possible the long holiday weekend could draw no more than half the tourists that came last year, a UNLV economist said. The prediction was based on LVCVA data showing the number of visitors in September and October was about half of what it was during those same months in 2019.

The high risk of disease transmission poses an obvious threat to Las Vegas, but also to the visitors’ home states.

After almost 500,000 people attended the Sturgis Motorcycle Rally in South Dakota in August, hundreds of attendees tested positive in more than a dozen states. The event may have led to more than 260,000 new cases nationwide, reported a study from San Diego State University.

Unlike South Dakota, Nevada has mandated mask wearing. However, Johns Hopkins’ D’Souza said that the most basic risk, people coming into close contact, cannot be eliminated on a busy night. “There absolutely are national consequences to these large events where people fly in from across the country, and mingle in large groups, and then leave,” she said. “Infection will come into Nevada that wasn’t there, and will also leave Las Vegas and go out to other parts of the country.”

“Any setting where there’s an opportunity for people to be unmasked, there’s a higher chance for disease transmission,” said state biostatistician Kyra Morgan. Restaurants and bars, along with casinos, are among the top industries receiving COVID-19 workplace safety complaints, Nevada state OSHA officials recently reported.

Strip resorts also repeatedly topped lists of businesses that infected Las Vegas residents said they visited before testing positive this summer. Nevertheless, Nevada Resort Association president Virginia Valentine said visitors should feel “very confident” that they can safely celebrate in hotel-casinos that have already spent months operating under the state’s COVID-19 safety measures, though under the lax enforcement typical of the Nevada Gaming Control Board. The hotel-casinos will be prepared to adhere to whatever capacity restrictions are in place at the time, Valentine said.

“We have created a very safe environment, and I think that visitors can be assured that their safety is our top priority,” she said. “New Year’s is a special time, but the health and safety requirements are the same for us every day.”