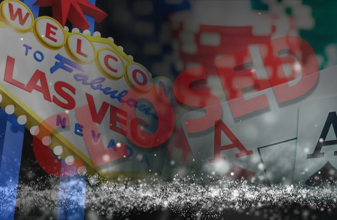 Many casino critics and patron advocates are recommending that there should be another mandated closure of casinos throughout Nevada. With visitors still pouring in from all over the world, it is nearly impossible to get the pandemic under control in Nevada, especially in Las Vegas and Reno. Yet Gov. Steve Sisolak has done little compared to his bold action at the beginning of the pandemic.

He continuously faces intense pressure from competing interests, and still has no help from the U.S. federal government under the outgoing administration. The lack of cooperation from casinos has been obvious, and enforcement from the Nevada Gaming Control Board nearly non-existent, as is the norm in Nevada.

Las Vegas in October received about half the number of visitors it had a year ago, but 9 percent more than it had in September. The Las Vegas Convention and Visitors Authority reported continued slumps in most significant tourism indicators for the month, the eighth straight month of declines.

The coronavirus pandemic has discouraged visitation since mid-March, when Gov. Steve Sisolak ordered casinos closed. The day shutdown ended in June, but the governor has now announced a new three-week “pause” that will further reduce capacity in casinos. Experts have yet to speculate how November numbers will fare with Sisolak ordering a maximum capacity of 25 percent of fire code capacity in resorts, reduced from 50 percent.

Sisolak announced that restaurants will be limited to 25% occupancy, down from 50%. Tables will also be restricted to no more than four guests, and reservations will be required. A number of restaurant operators questioned how long they could continue operating under those constraints, which Sisolak said will remain in place at least three weeks.

“With the fixed costs that we have and no relief from the government, we can’t operate at 25% occupancy and make money,” one restaurateur said. “It’s almost game over.”

Another said the 50% cap was already a death sentence for many restaurants. “Now going to 25%, the question is just about how long we let the bleeding happen before we have to close.”

Penny Chutima, manager of Lotus of Siam, a family-run Thai restaurant on East Sahara Avenue, described the shifting mandates as “playing Russian roulette, trying to see what works and what doesn’t work.”

In making his announcement, Sisolak pointed out the unique challenges restaurants face in trying to help control the spread of the virus. “I know the majority of our bars and restaurants are doing their best, but these settings are proven to be high risk because they allow the opportunity for people to remove their face coverings in indoor settings around people outside of their household. That’s how the virus spreads,” he said.

If business conditions don’t improve this winter, one owner said, his restaurant might have to close, at least temporarily. “Maybe you close for two or three months until the vaccines are available, or maybe it’s six months.”

As bad as the lost business is, Buddy V’s in The Venetian manager Elizabeth Blau says the last-minute nature of the announcement makes it even worse.

“We ordered the turkeys weeks ago. So, for the governor to tell us on Sunday night that these restrictions are going into place on Monday (night), knowing that there’s a holiday, is just completely irresponsible. What am I supposed to do with all of these leftover turkeys? What am I supposed to tell the vendors, our bakers, our farmers? We don’t need this product?”

Another operator has been trying to avoid the waste of food by offering it in another format to customers who call to cancel. “While we have them on the phone we’re offering the Thanksgiving takeout, and quite a few have opted for that. I’m trying to convert everybody who calls.”

“We were already in a terrible financial position, and this three weeks pretty much takes us through the holidays. The governor is requiring reservations. He’s requiring tables of four. He’s requiring 25 percent occupancy. And now you have to wear a mask, even during a meal. It’s like, can you blindfold us also?”

In some respects, the current situation is worse for restaurants than the original shutdown, when there was at least the possibility of rent relief or some government aid. “With 25 percent capacity and no help, I honestly don’t know how long that’s sustainable. Where is the help? We’re all suffering,” Blau said. “We don’t understand how our industry was singled out, without any kind of plan for helping us. It’s maddening. We’re just like pawns in this game.”

Though nearly all neutral observers have condemned the governor’s actions as far too little, the mayor of Las Vegas has attacked him for doing too much to try to control the pandemic. Mayor Carolyn Goodman, who has embarrassed Las Vegans before with her cavalier attitude towards COVID deaths, has spoken out again.

As Southern Nevadan governments announced adjustments to adhere to stricter statewide rules amid a surging spread of the coronavirus, the mayor called Sisolak “a dictator.”

“He’s been a dictator with whom we have complied every step of the way,” Goodman said. “We’ve had no choice.”

Goodman has been the state’s loudest critic of the restrictions meant to slow the outbreak. But the mayor expressed an escalating frustration with the governor after he issued the 25 percent order. “Obviously this was crushing to the city,” she said.

Goodman added that it had already been difficult for small businesses to survive at half-capacity and that she foresees stronger measures after the three-week “statewide pause” because COVID-19 would not be truly mitigated until there are widespread vaccinations. “He’s tried all these measures, and it is still here,” she said.

Goodman’s most forceful rebuke of the governor — twice calling him a “dictator” — came as she said he does not reach out to mayors for advice. If Sisolak did speak with her, Goodman said, she would articulate how his restrictions are devastating to local residents. However, the city of Las Vegas is part of the Southern Nevada Regional Recovery Organization, which reports weekly to the state’s coronavirus task force. Communication between mayors and the governor is thus assured.

In a statement, Sisolak said the state has worked with local elected officials throughout the crisis and noted that the city of Las Vegas has routinely failed to meet business compliance inspection quotas as it agreed to along with the other Southern Nevada governments in the recovery organization.

“Regardless, when Nevada’s elected leaders speak, their words carry weight — and these difficult times call for our leaders to be unified in protecting the public,” he said. “I’ll be providing no further comment on the mayor’s statement. The State will continue working with all local governments directly and through their organizational representatives, such as the Nevada League of Cities and Municipalities, as we have throughout the pandemic.”

The Las Vegas Monorail, a white elephant from the time it was built, despite its promoters siphoning off millions of dollars for themselves, was doomed to failure by poor location and route planning. It has now become the problem of the Las Vegas Visitors and Convention Authority.

A U.S. Bankruptcy Court judge approved the sale of the Las Vegas Monorail to the Las Vegas Convention and Visitors Authority. Bankruptcy Court Judge Natalie Cox said that she would sign an order that would enable the LVCVA to acquire the short elevated transit system for $24.26 million. Most of the money generated by the sale will be distributed to creditors.

The LVCVA’s primary interest in acquiring the system is to control a non-compete agreement that would enable Elon Musk’s The Boring Co. to build a competing underground transit system. The LVCVA will now be able to allow the company to develop an estimated 15 miles of tunnels for a new, untested system.

“October visitation to Las Vegas half of what it was a year ago”, Richard N. Velotta, lvrj.com, November 24, 2020.