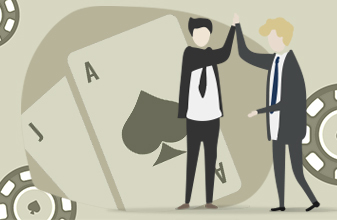 I once partnered up with a guy I met on Green Chip years ago. After a couple of losing sessions, I became very suspicious that he was hiding chips from me. I quickly dissolved the partnership. I usually go to Las Vegas alone, but live far away so the hassles of traveling there plus the loneliness made me quit. I'd like to try this again but am skeptical of the trust issue again. I know I could pay someone an hourly or session wage where I could count and play minimum, then signal when he should come in with the big bets (“gorilla”). But even this gets quite messy when it comes to the large bankroll he would have to carry. If he were an advantage player, he would probably be thinking the same thing about me. Any advice on playing with strangers?

DD’: This is difficult starting out, but later you simply only do business with people who have a good reputation in the AP community. Almost all successful pros I know have had various partnerships. There are lots of things you just can't exploit properly on your own. Once you screw somebody over your reputation is shot and nobody will do business with you. So... you choose partners who have a good reputation to maintain -- people who have more to lose by ripping you off than they will gain.

Emerald City BJ: Team play is a gamble initially. I've been on a common bankroll with others for a few years now, and over that period of time, I have learned and experienced a great deal in terms of working with other advantage players.

In addition to trust issues around the bankroll, there are a number of other issues that can come up, including:

As DD' commented, starting out is difficult, and until you establish enough credibility yourself to network with established pros, working with anyone is a gamble and comes with an inherent risk. My recommendation is to start at lower stakes. Like any other gamble, don't invest more than you are willing to lose in the venture. As you build trust with your teammates, you can gradually increase the stakes.

Baddog: I dealt with a group I met online. Another I partnered with a good friend who had become a card counter. The group fell apart because of management issues. The two-man team is still going well after 10+ years. In discussing the issues with others, it seems the main requirement of a team composed of more than two or three people is effective management and the use of polygraphs and the like.

DD: We didn’t use polygraphs. As soon as you suspect someone of dishonesty, the business relationship is already over. It doesn't matter what the result of the lie detector test is. They have already failed your test. Also, as soon as you ask them, you have failed them. They now know that there is no longer mutual trust. The relationship won't work.

You may be able to do other business with this individual but it will have to be of a nature that this type of absolute trust is not required. Something where there is a concrete system of checks.

The next step removed is doable but not as efficient. You always have two team members working together. And not always the same two. This way two team members have to actually conspire. This significantly reduces the chances of theft and embezzlement as neither knows if the other will go along with it. Many teams work this way. It is not as efficient as each member being able to do his own thing, but it is the only workable way when you don't have absolute mutual trust.

casino zerg: I play on a shared bankroll with a few friends I knew before getting serious about AP. I have complete trust in them.

I also do networking and share information with some people I have met online. It is possible that someday I will trust these people enough to team up in a shared-bank way, but I think it would be really hard. There are enough things in this business that it is hard to be sure about. I can't imagine adding the trust issue.

It’s a waste of time, effort, and hourly EV to try to set up a two-man spotter/gorilla team. Just count different tables.

Originally published on bj21.com Green Chip, edited for this format.​​​​​​​

I have been playing at an advantage for a few years now and I am definitely a winning player. I have only been approached twice by other players and I was to afraid to admit anything to them for fear they might actually be casino employees.
I would love to find out how to go about meeting other players and maybe joining a team for a while just to get my feet wet. It is a very lonely business when you are doing it alone and quite honestly I skip a lot of trips because of that I only go about 8-10 trips a year. I have been backed off a couple of times and I am usually pretty profitable. How would I go about meeting other players.

It's tough to become part of a team, because few will partner up (or even meet) with strangers. Contributing to and maintaining a visible presence on Green Chip is the route taken by many others before you with varying degrees of success, as you can see from the articles about team play.

The following article on blackjackinfo.com may also be of interest. Good luck to you.