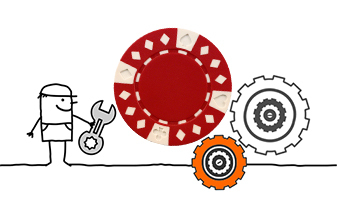 Often, there are questions from individuals, usually new players, asking about progression betting systems. Sometimes, we'll see a post from someone who says, "Hey everybody! I've just discovered this great new system where you double your bet after every loss until you win. You can't lose!"

It might be useful to discuss the most common betting progressions in order to let folks identify them when they see them. If you are a progression bettor, you need to read this: NO PROGRESSION SYSTEM WILL WIN IN THE LONG RUN. Without card counting or some other form of advantage play, a progression is a system you don't want to use if you are serious about making money in the casino. All progression systems, used without a form of advantage play, give you a 100% chance of losing all of your money.

There is no "easy money" in blackjack. You must learn a legitimate method of advantage play in order to win in the long run. A progression is NOT "advantage play" - it's a loser's system.

The most common progression systems are either "up as you lose" systems or the exact opposite, "up as you win" progressions. They have one thing in common -- they don't work.

"UP AS YOU LOSE" SYSTEMS

Martingale: This is the most infamous of these types of systems and they all bear some relationship to it. The premise is simple: you double your bet after each loss until you win, then you start over. A common series would look like this: 1 unit, lose, bet two units, lose, bet four units, lose, bet eight units and so on. If you win, you are one unit ahead for your series and you begin again. The problems with this system should be obvious to anyone. Long losing streaks are not uncommon in blackjack, and when you encounter one (and you will, and it will be just long enough to break you), you will lose everything you have gained. A ten-hand losing streak would have your final bet at $2560 if you started with a $5 bet. If you lost it, you would have lost a total of $5115. If you won it, you would have gained $5. You can expect to see about 3 of those losing streaks in every ten hours of play (figuring in pushes, and assuming 100 hands per hour).

Martingale comes in other guises. One of them, some call a "Super Martingale," where you add one unit to your next bet after doubling it. It looks like this: 1-3-7-15-31 and so on. Some hucksters have marketed it as a roulette system and sold it for $40 in a very popular gambling magazine. It is touted as a "power" system. Selling such a system is a scam, pure and simple.

Fibonacci: This system is a little more sophisticated, but the results can be as devastating as our old friend Martingale. It is a series of numbers, each of which is the sum of the last two numbers in the system, like this: 1-1-2-3-5-8-13-21-34-55-89-144. Advice about betting it varies, but one of the more common is to bet the series as you lose. If you win a bet, fall back one in the series. If you win that one, start over. If you lose, continue on in the series.

D'Alembert: In this system, you raise your bet one unit if you lose and lower it one unit if you win, which means your winning bets will be higher than your losing bets. It would look like this in practice: 1, lose and go to 2, lose and go to 3, win and drop to 2, lose and go to 3, lose again, bet 4, win, bet 3 ad infinitum. It looks attractive, but the end result is the same: you will eventually lose all of your money. A ten loss series would have you down 55 units and you would have a hard time getting out of that hole.

Labouchere: This is also known as the cancellation system. Pick a series of numbers; say 1,2,3,4,5. Your first bet is the total of the two numbers on the end, or 6 units in this case. If you lose it, you cancel out the 1 and the 5, add the six to the end of the series and bet the 6 and the 2, for a total of eight units bet. Lose that one and you add the eight to the series, cancel the 2 and the six and bet a total of 11 (3+8) and so on. If you win, you proceed to the inside numbers until they are all cancelled out. Again, a loser, and an insidious one.

"31" system: This system has many variations. Instead of relying on one win to get you back in the black, it relies on two. The "31" system takes its name from the total number of units in the series. The progression goes: 1-1-1-4-8-16. If you lose, go to the next step. If you win, double the last bet. If you win that, start all over, if you lose, go to the next step. This type of double-up progression can come in many guises, but the principle is the same. It's a bad way to lose good money.

2-5 System: This system says you only have to win 40% of your bets to come out ahead or nearly so. Now we're talking! The series is designed with five numbers. Win any two of them and you've won the series and you can start over. An example would be 5-7-12-15-25. Win any two in that series and its over. It's still a loser. Wait until you've hit the last bet in the series and you lose a double down hand. Ouch!

"UP AS YOU WIN" SYSTEMS

Dahl's Progression: This system is found in Dahl's book Progression Blackjack, which claims to expose the "card counting myth" and give the player "an edge in '21'." It is a progression in which the bettor raises bets with each win. A $5 progression is 5-5-7-7-10-10-15-15-25-25-35-35-50. Win two bets and go to the next level. A blackjack entitles you to skip a step and a double down lets you skip two steps. If you ever get to the top bet, which might be expected to happen once every 10,000 hands or so, factoring in ties, you stay there until you lose. Any loss in the series and you start over.

Up and Pull: This is also known as a "regression/progression" system. You start with two units. If you win, you "pull back" or "regress" to one unit. If you win that, go back to two units, then steadily go up and back until you've reached some pre-set cutoff point, or, until you run into the table limit.

Hoyle's Press, aka Oscar's Grind: This system is designed to win one unit per series. Flat bet until you lose. Then continue to flat bet until a win. At that point, raise your bet one unit and bet at that level until you have recouped your loss plus one unit. It might go like this: 1-L. 1-L, 1-W, 2-W. Thus, you have won one unit from your initial two-unit loss and your series is over. This system looks good until you run into a spotty streak followed by a long losing streak. All of a sudden, you have a lot of money on the table and it's going to take a looooonnnng winning streak to get it back.

Reverse Martingale: This system is the opposite of the Martingale described above. Instead of doubling your bets after a loss, you double after each win. Of course, if you lose a bet in the series, you have wiped out your wins plus one unit. Not a good deal when the house has the advantage.

All of the systems described above have many variations, but they all purport to give a person the edge in a negative expectation game. The fact is, they don't. No amount of tweaks, twists or twiddling is going to make them winning systems. Any system that relies on a betting progression to beat a negative expectation game will fail. If, as in many blackjack games, a non-counting basic strategy player can expect the house to have a half a percent advantage, the fact is, he is losing one-half percent of each bet he makes. The more he bets, the more he loses.

It's unfortunate that there are several books on the market published by individuals who claim that their "systems" can somehow defy the laws of mathematics. These books prey upon the gullible and naïve, who want to believe that blackjack can be beaten without the effort of learning a legitimate counting system or other form of advantage play.

The "systems" touted in these books are worthless scams. Such books are a total waste of money.

NO PROGRESSION SYSTEM WILL WIN IN THE LONG RUN. Forget about them!