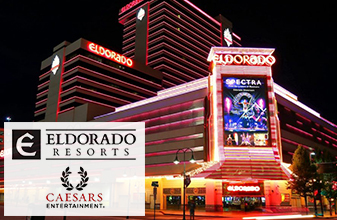 Eldorado Resorts will furlough a large majority of its nationwide workforce after paying wages and benefits to employees during the nationwide casino industry shutdown that began last month due to the coronavirus pandemic.

In a memo to employees at the company’s three casino resorts in downtown Reno – home of Eldorado’s corporate headquarters – an executive told the full-time staff they would go on furlough, which the company expects to be “temporary (less than three months).”

A company source said Thursday it is expected similar notices will be distributed at Eldorado’s 23 properties in 11 states. Eldorado has committed last month to workers through Friday.

At the end of December, Eldorado employed roughly 15,500 workers nationwide, according to a company filing with the U.S. Securities and Exchange Commission.

“Although we have been ordered to close all of our casino resorts across the country, we are pleased to have continued to pay full-time team members through April 10,” General Manager Tracy Mimno wrote to the employees of Eldorado Reno, Silver Legacy and Circus Circus Reno, which are referred to as “The Row.”

Mimno said the company made the “difficult decision” to implement a leave of absence, which is a furlough. Eldorado will continue to pay health benefits through June 30, allow employees to use one-week of “flexible time off” on the first week of the furlough, and are encouraged to file for unemployment assistance.

Eldorado and Caesars are in the final stages of completing a merger between the two companies. The deal, which is still anticipated to close by the end of June, requires approvals from gaming regulators in Nevada, New Jersey, and Indiana, as well as the Federal Trade Commission. Analysts have said the deal remains fully financed and will create the industry’s largest operator,

Recently, Las Vegas-based Caesars said it similarly was furloughing most of the company’s workforce. The company’s entire casino portfolio of 53 properties in 14 states is also shut down due to the pandemic. Caesars employs 64,000 throughout the organization, according to a filing with the SEC.

Eldorado is the acquiring company in the merger. Its management will control the merged operation and the company will take on the Caesars name.

Eldorado has agreed to sell its management stake in the Montbleu Resort in Lake Tahoe and agreed to sell the Eldorado Shreveport to Las Vegas-based Maverick Gaming. Both are expected to close in the second half of the year and would remove the anti-trust issues hanging over the deal.

Eldorado also has a deal in place to sell Isle of Capri Kansas City and Lady Luck Vicksburg to Twin River Worldwide Holdings, a transaction expected to close in the second half of the year.