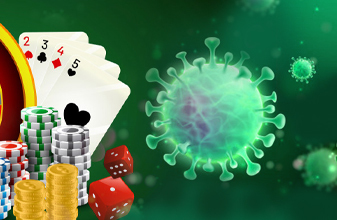 The coronavirus COVID-19 pandemic has disrupted much of everyday life and sent the United States economy hurtling toward a recession.

In a matter of days, the intensifying coronavirus outbreak — and its unprecedented economic fallout — triggered huge shutdowns within the casino industry. All Nevada casinos have been ordered closed, sidelining blackjack players, including card counters and other advantage players. Other state governments have ordered closures; the list is growing by the hour.

The public health crisis is grinding the U.S. economy to a slow crawl, upending entire industries — from sports to travel to entertainment — and sparking layoffs across the country. Consumer spending has plummeted as people increasingly steer clear of restaurants, shopping centers and even their own workplaces to mitigate the spread of the highly contagious virus, which has killed thousands of people worldwide and been detected in dozens of countries and every state except West Virginia, as of this writing.

With many of the nation’s biggest attractions closing because of the pandemic, it is unclear how much longer the casino industry, which supports 1.8 million jobs, can hold out. A prolonged shutdown could have long-lasting effects in Las Vegas and Atlantic City, where the industry is a large regional employer and a top economic engine in those communities and their states.

Before Sunday’s announcement about MGM’s Las Vegas properties, the company had already started furloughs and layoffs, the Las Vegas Review-Journal reported. Several MGM employees tested positive for the coronavirus, according to a letter to workers obtained by Las Vegas media outlets.

Massachusetts also closed all of its casinos. Regulators there said that all three would go dark for at least two weeks. The Illinois Gaming Board ordered the state’s ten casinos to close for two weeks. Other gambling centers are closing each day. Extensions of time to remain closed are a possibility in two weeks, according to government officials.

“The only other time I’ve heard about a casino closing is when it has caught on fire,” a patron said.

Culinary Union contracts protect 60,000 workers in Las Vegas. Those agreements already stipulate that when business returns to some semblance of normalcy, workers will return to their jobs by seniority.

David Schwartz, an expert on gambling and casinos at the University of Nevada at Las Vegas, said the effect on the casino industry will ripple through local economies, state budgets and anyone whose livelihood relies on hotels, clubs, gambling, food services and entertainment.

However, even after the pandemic is contained, it’s hard to say how quickly casinos will bounce back. It might take years, as it did in some areas after the recession of a decade ago. Some never recovered.

"All bets are off: Casinos grind to a halt over coronavirus", Rachel Siegel, washingtonpost.com, March 16, 2020