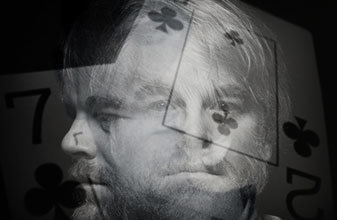 Jack Vegas: What to do when other casino patrons don't stop talking? Most people have a filter. When they attempt a conversation with a nonchalant, two- or three-syllable responder (me), they eventually stop trying and chat up someone else. But a select minority of ploppies don't -- this is about the non stop-talkers.

No matter what you do, no matter what you say or don't say, they will not stop trying to talk to you! What do you do in situations like this? Have you experienced this? Or am I the only lucky one?

I don't want to be outright rude (but I will, can, and have, when I feel I must), as rudeness often just fires these people up, especially if they've been drinking; but I don't engage them whatsoever beyond a few short go-nowhere replies in the first few minutes.

I’m glad these people are rare, but they’re still common enough to be a problem for me. I have found that betting at higher stakes has caused a lot more problems this way than when I played at moderate stakes -- I think some people just like talking to the biggest bettor at the table.

And I'm no newbie; I know the basics, or at least I think I do, of fading into the background. With my advantage play style, I often can play marathon sessions. I try not to even speak for as long as I can. When I wordlessly buy in, I just agree with whatever the dealer wants to give me and nod my head.

Then I ignore everyone else at my table for hours on end. But then, at the end of this, somebody will still be applauding my every hand. If I speak up when the dealer underpays someone, then the floodgates open, "Hey buddy, thank you, I never would have seen that; I've been blah blah blah all blah blah blah, so what do you do for a living? Blah blah blah." I know my actions have caused this, but I sometimes can't help trying to have some measure of justice at the table -- is there any way morally I can keep my mouth shut? It just seems wrong to me, to knowingly let a person get underpaid, and I don’t think I can ever change this about myself.

I also speak up when someone is bullying someone else; this obviously causes problems as well.

And what do you do when it's the absolute worst situation where a ploppy carries a one-sided conversation with you every hand? These people are obviously completely unself-aware and likely have been their whole lives, so what can you do with this special animal? Nothing works. They cannot accept in their minds that a stranger might not want to be the recipient of their attention; they think it’s a gift that they have graciously bestowed to me -- their precious attention. It’s a valuable offering to them, and from the lucky recipient, the lack of gratitude is inconceivable. Please tell me what I can do to get rid of these people -- tell me I can politely tell them I'm tired or my dog died or whatever.

Last thing, drunk people. It is my experience that their one-way conversation just has to be accepted, and rudeness blows up in my face to the point where I think it's not worth it. I've experienced threats, got a few people kicked out and altogether received way too much attention. So I now let my new best friend ramble on while I grit my teeth.

Or maybe I should learn to just let it go? To not say anything and when questioned say I've had a bad day or whatever?

LV Bear: I know my actions have caused this, but I sometimes can't help trying to have some measure of justice at the table -- is there any way morally I can keep my mouth shut? It just seems wrong to me, to knowingly let a person get underpaid, and I don’t think I can ever change this about myself.

Remind yourself that the sooner they tap out, the sooner they leave. They are there to lose all their money anyway; help them do it more quickly so they can move on to more productive uses of their time.

I also speak up when someone is bullying someone else; this obviously causes problems as well.

This is a little tougher, but if you can anger the bully, he might leave the table. Interceding when a bully is berating the dealer is particularly good in a self-serving as well as a humanitarian way. Few people bother to defend a dealer; the dealer and floorperson will usually appreciate it.

Many years ago, I fended off a bully who was harassing a dealer. That dealer later became a pit boss at another store. She remembered me, and let me play on her shift without hassle for years. She told the shift manager of another shift about the incident, and that manager let me play unbothered, too. That one act of kindness netted me well into five figures, and many hours of enjoyable play.

Canadian Player: Make a simple statement such as, "I'm sorry, I am not in the mood for talking. I am having some personal problems and I find a few hours of playing blackjack (or whatever game) to be relaxing and helpful. I just want to be alone with my thoughts" or something like that. Not much works with drunks, as they are after all -- drunk. Good points made by LV Bear; simple acts of kindness to dealers and pit bosses often come back in spades.

21forme: What's wrong with talking? Is it disrupting your concentration re the count? If so, it's best to get more proficient at counting. Practice counting two tables at the same time. Practice counting one table while someone is talking to you.

Being involved in conversation provides camo (albeit, minor, as surveillance can't hear you) that doesn't cost any EV. I've overheard pit bosses discussing my play and making comments like, "How can he be counting? He's been talking to the dealer (or the player next to him, or fill in the blank) the whole time..."

Jack Vegas: Talking is definitely good for cover -- it's about the times when I just want to fade into the background for specific reasons, usually tied into wanting to play a marathon session against a particular dealer.

I just wish they would let us wear headphones at the table games. Nothing like some sounds of nature rainstorm white noise to help your concentration.