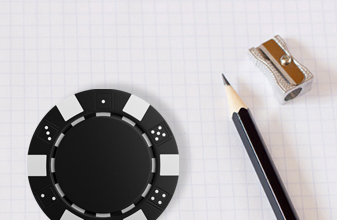 Friendo: I think the average IQ of the casino customer base is substantially less than 100. Some of my recent observations:

I. Guy placing multiple bets colors up in disgust after the second round, complaining "12 straight cards with no aces or faces -- this shoe is a piece of crap!" In this case the gambler's fallacy is your friend, yet many gamblers choose to ignore an obviously favorable count.

II. In another shoe -- the kind where the quantity of aces and faces in the discards (plus the sudden fullness of the table) means it's more profitable to go figure out why the hand-proximity sensor faucets in the bathroom don't always work, or at least determine which one is the most reliable -- I color up and create great dampness in the local handkerchiefs and heaving of area bosoms: "Gott im Himmel! You are creating an empty spot! Won't you please just play that spot through the end of the shoe?"

Then the girl sitting next to me apologizes (again) for "taking the dealer bust card" several times and hurting my winnings. For the third time -- this time more sincerely, since I'm not repeating "-8 ... -8 ... -8 ..." over and over in my head -- I turn to her and say "Not a problem; you didn't do anything wrong," and I notice that she is actually tearing up from guilt and self-loathing.

III. An articulate and, to all outward appearances, successful fellow at first base plays each hand only after checking all the other hands for who will need to take a hit before he stands on his A6, seeing as there are probably only 2-3 nines or tens in the 3 decks left (lol), and we wouldn't want to waste one. When I color up, his face reddens as he begs me to stay.

IV. Another color-up: table has filled up, and the rounds per hour have dropped to low double figures. Not only have the customers repeatedly failed to detect which of four circles is for the actual blackjack bet as opposed to a side bet, but one of the side bets is so complicated that the dealer must explain it repeatedly. Time to color up: "Ooh, this isn’t good -- we had all the spots filled" says the suave, self-assured ploppy who has already filled the spot of the departed first baseman.

I have learned not to underestimate anyone -- having been outsmarted enough times by people of all ages, races, creeds, educational backgrounds and (most memorably) genders. I usually figure that the average IQ in any public space containing more than 50 people is pretty close to 100. I have worked with enough people who make particular bad life choices (meth, tobacco, hard alcohol every night) to know that bad habits say little about general brains.

But gambling might be radically different. Maybe casinos select for stupidity, and screen for ineptitude. Would any industry be blessed to have the customer base that casinos enjoy? Is there something uniquely stupid about casino patrons?

21forme: Are typical casino gamblers dumber than average? I don't think so. They are probably average, but average is not smart. For some reason, gamblers don't educate themselves about their addiction or entertainment, whatever you wish to call it. How many times have you seen a player sit down at a carnival game, throw out the money, then ask how to play the game? In my opinion, there's a genetic predisposition for an addictive personality, whether gambling, smoking, or alcoholism. Interesting how those three often seem to coexist, isn't it?

There are also some fairly intelligent, successful-in-life gamblers. However, rationality seems to go out the window when it comes to gambling. Back to that addictive personality trait.

What do you think they average IQ of a dealer is? I've seen some dealers who seem fairly bright, are college educated, and are very personable. I've often wondered why they have such a lousy job.

Rockky176: Gamblers are not in the casino to minimize losses through good play or basic strategy. It does not make any sense if you think about it. If they know their expected loss is 5% and if they learn the game it would be 2%, then why would they waste their time to lose 2%? They are there to gamble against the odds. If they go to the casino with $500, they’d rather lose it all or win $10,000. They are not there to come back home with $495 instead of $485.

Steve Waugh: Many high-stakes gamblers are very competitive and do not want to lose. Many high-stakes gamblers know to play basic strategy fairly well (including hitting soft 18 against 9, 10 and Ace) and they know that they are small underdogs. They choose to gamble knowing that they just need a little bit of luck to beat the casino and that is a thrill for them. You cannot convince them to play a negative 5% or even a 2% game. They would play a negative 0.5% game or at worst a negative 1% game and try and get lucky just a little bit. Many of these guys are also successful people in their real lives and make well into six figures a year. The same competitive instincts that drove them to success in their work life unfortunately keep them trying to beat the casinos (albeit unsuccessfully) using mere basic strategy. For some reason, they choose to not learn advantage play techniques or are not good at it.

Hodger: I know many high-net-worth gamblers from the tech world. These are people who went to Stanford, MIT, Cal-Berkeley, Wharton, Harvard (MBA), etc. They have high six-figure or seven-figure salaries and millions in stock options.

Gambling is a release. A time to let their mind and analytical world go. Counting cards would take away from the release. Even losing at 3-4% instead of .5% would make no difference to them, even playing black chips.

Counting cards would be a waste of time; they should spend their time in their career, as no positive EV from blackjack could likely come close to that, given that they would not tolerate or enjoy card counting. They also like/enjoy the casino schmoozing all over them which may not happen as an AP, and backoffs would also be very negative to them.

I think life is about maximizing your +EV of enjoyment. If you usually spend $10-15k each year on Ski vacations or Europe trips, then gambling is not a huge cost factor for many.

If you are really smart, then spending time on gambling is usually a waste of +EV.

If you are super smart then going into high-tech, law, medicine, or hedge funds is a much better return on time than gambling. Looking at the list of the Fortune 500, I have never seen anyone there from gambling. The reasons are that if you are an AP, the casinos will try to prevent you from making huge sums of money. I know people who played on the MIT team and none of them are really rich from it. Maybe they won seven figures, which is a very small amount of money in the top echelons of money makers. Same with poker players. Sure, a few have won big but the game is not zero sum (house take and tokes make it net -EV) and winning is challenging.

Now gambling for fun or recreation is a different thing. But putting people down or thinking you are "smarter" than them is something else. My guess is that if everyone who ever learned how to count cards spent the same amount of time studying computer science or went to law school they would make much more money, if +EV is all you care about in the world.

I played poker one day at a 50/100 game. I love to gamble and consider it great fun but not major +EV for lifestyle. There was a guy playing almost every hand in limit hold-em. We were at the Mirage. When he left down $3.5k, the old timers were making fun of him. Turns out he was some hedge fund manager taking a few days down time in Las Vegas. His net worth was eight figures which I would guess was at least five times the combined net worth of everyone else at the table. Everyone thought he was a total hayseed, but in reality he was just having some down time and the + or - EV made no difference to him either way. He enjoyed the action and that likely brought him more lifetime utility than playing tight poker, the same may be true for basic strategy or hunch blackjack.

Plopster: We do put the ploppies down too much, without knowing them.

Don't we occasionally go to the movies without reading a zillion reviews, often seeing a movie on impulse or just because a well known actress we like is playing in it or whatever? Do we go to a movie house and laugh at the other movie goers who opted to see a dumb, mindless movie instead of the one we chose?

To some, going to a casino is like going to a movie -- they have some disposable amount to spend and they just do it. To others, it's easier to seduce their date at a casino than at a museum.

Wham: there are two types of ploppies -- educated and uneducated. The educated guy is going to play close to basic strategy; he's going to know that 6/5 is a ripoff or single-zero roulette is better than double-zero roulette. Uneducated ploppies don't know the difference between keno and craps; it's all the same to them, just one big gamble. I have no respect for uneducated ploppies who blow their money on ridiculous games like 6/5 “blackjack,” especially when there are usually better games in the very same casino!

I tried to teach a friend of mine to count cards. He isn’t rich, but he definitely isn’t poor. He was gung ho for about two weeks. He counted down a deck in 30 seconds, but when it came time to play live, he couldn't stop drinking and carrying on as he usually had done in the past. He gave up, saying it was too hard to keep the count and it started to feel like "work.” Oh, well -- he plops on.