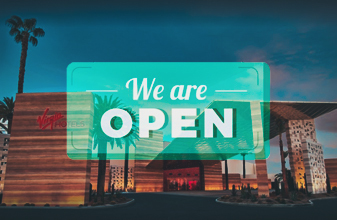 The Hard Rock Hotel and Casino closed over a year ago, slightly before the pandemic shut down all Nevada casinos.

Recently, the doors reopened with much fanfare, including a new owner, new casino operator, and a fresh look. The hotel is operated by Virgin Hotels; the casino by Mohegan Sun, the first Indian tribe-operated major casino in Las Vegas.

Other tribal casinos in Nevada include the Avi in Laughlin. Even though these properties are operated by tribes, they are nevertheless under the jurisdiction of the Nevada Gaming Control Board, giving patrons at least minimal protection compared to the lack of meaningful regulation of tribal casinos in most of the United States.

“May we live in a world and may Las Vegas live in a world where we never have to close doors again to our resorts,” said Richard “Boz” Bosworth, president and CEO of JC Hospitality, owner of Virgin Hotels Las Vegas.

“How proud we are to be opening tonight, not with fireworks, not with lasers shooting up to the sky, but as Las Vegas begins reopening and recovery,” he said. “We welcome the community back to 4455 Paradise Road and 1,600 hospitality professionals that have been out of work for a year.”

One former Hard Rock employee was bouncing from person to person on the casino floor, making conversation and chatting up friends old and new. “When I walked in here, the first thing I said was, ‘I’m coming back,’” she remarked to a random slot machine player.

The Las Vegas resident was a casino porter at Hard Rock before it closed last February, she said. Walking around the Virgin hotel for the first time, seeing many of her former co-workers, has her excited and itching to return as an employee.

Her familiarity with the people would come in handy.

“In fact, I got lost. I had to ask a security guard I know where’s the bathroom,” she said with a laugh.

Anticipation of opening day prevented a good night’s sleep for a few of the employees. A card dealer answered a guest’s questions wearing a smile that even a mask couldn’t hide. “I’m real excited,” the dealer said a few minutes before the casino’s official opening. “I was so excited today to come here, I couldn’t even sleep.”

It had been a while since she last worked at a casino, so she brushed up her skills at the Crescent School of Gaming and Bartending.

Some professional card counters, among various types of advantage players, were observed checking out the blackjack and other game offerings. It is a well-established norm for those patrons to be in abundant attendance at casino openings, knowing there are often vulnerabilities to be exploited before the game protection employees’ skills are sharpened.

Two regular patrons wondered if the nearby line of about 100 people was for people signing up for Mohegan’s player’s card program. It was. The Las Vegas locals were staying at the property for the weekend. They said they occasionally visited the Hard Rock but figured they should check out the opening. They were impressed with what they saw.

“Opening night. Why not? See what they bring, because they’re gonna bring all their best tonight. And I think also after COVID, and being locked down so long, we’re all just ready to run out of the house. If it wasn’t for the masks, you would think this was a normal casino opening.”

People of all ages packed the casino floor and event lawn on opening night.

Plexiglass partitions divided the seats at slot and gaming machines and the spots at the gaming tables.

It appeared every casino employee wore a mask; nearly all of the guests wore one, too. Most of those who didn’t were sitting at a restaurant table or had a drink in their hand.

One maskless woman waiting in a line near a restaurant was overheard saying, “If the mask police come by, they’re gonna get me.” Every other guest in line appeared to have one.

Most of the resort’s employees are former Hard Rock workers, and in the casino, half the 600 slot machines on the casino floor are from the Hard Rock, with the other half being new additions to the property.