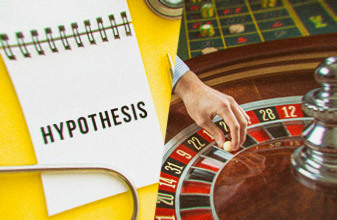 Serious sports bettors should learn the information herein. You should not be placing bets online or in land-based casinos without this fundamental knowledge.

If, after starting to gather data to test your sports-betting hypothesis, you decide that your hypothesis needs modification, then fine, modify the hypothesis.

For example, suppose you used games played during the 2017 season to formulate the hypothesis “Dogs in the NFL of +5.5 or more are good bets.” Then you examined games played during the 2018 season. After studying those games, you concluded that your model seems to work better if applied only to home dogs and not to traveling dogs. So you change your hypothesis to “NFL home dogs of +5.5 or more are good bets.” Then you must throw out the 2018 data because it was used to modify your hypothesis. You must start your testing all over again, and this time not use any 2017 or 2018 games because they were used in the formulation and modification of your hypothesis.

You might decide several times to modify your hypothesis. Each time you modify it, you must throw out the games you have looked at so far and not use them to test your newly modified hypothesis.

You might, for example, next look at results of 2019 NFL games. You might decide that your theory seems to work better if applied to only home dogs of +7 or more, instead of home dogs of +5.5 or more. So modify your hypothesis to “NFL home dogs of +7 or more are good bets.” Then you must throw out the 2019 games and start your testing all over again. You have now thrown out 2017-2019 games, which leaves games played in 2016 and earlier as well as games played in 2020 and later to test your hypothesis.

Using Roulette as an Example

Roulette is a casino game, frequently seen in Las Vegas and most other casino locations, featuring a ball that is spun around a track and falls down into one of 37 or 38 numbered slots. I could watch a hundred spins of the ball, keeping careful track of which numbers won. Then I could analyze the results to find out which numbers tended to follow which numbers.

Maybe I would find a profit for betting odd after two consecutive even numbers, red after a red-black-red sequence, and so forth. Suppose I did this and used my data to devise a roulette system, and offered to sell it to you. Would you buy this system? Your answer should be “No.” Such a roulette system could only tell you which numbers tended to follow which numbers for the 100 spins I happened to watch. Only by coincidence would that system work on a different 100 spins. You do not have the option of betting on the 100 spins I watched, so my roulette system would be worthless to you. It would be a real surprise if it worked on balls that have yet to be spun.

Suppose I carefully analyzed the results of the NFL games that were played last season to find the characteristics of the winners ATS (against the spread). I could come up with a system that would have made money had I used it for those games. Of course I did not use it to make money on those games because I did not formulate the system until those games had already been played. But I could write an ad telling you how much money you could have made had you used my system on those games. Would you be willing to bet your money on that system? Again, your answer should be “No” because you do not have the option of betting the particular games on which the system would have worked.