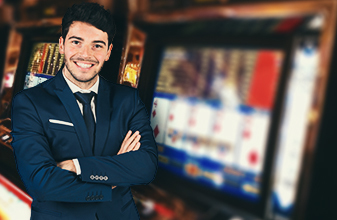 I am a video poker novice. I first played decades ago, when it was more lucrative, but was bored by it. Since I was eventually backed off so much at blackjack and Spanish 21, I decided to give VP another try. This is my rambling report.

It proves I'm a novice when you note that I played at only 400 hands per hour. Sigh. It might behoove me to flip burgers at Mickey D's instead. At the time I took a guess that the 9-5 and 8-6 payouts would cost about 1%, which turned out to be spot on. I didn't know which was better to play, 9-5 or 8-6. I looked it up later to find almost no difference. I still haven't looked it up to see if there are differences in playing strategy to the 9-6 play strategy I used from the Wizard of Odds site. You can see this was a bit of a mission of discovery, since I had not played for over a year. I confess I didn't even walk the entire casino to find the best payout odds machine. Seriously lazy. A pro would truly scout every machine. I was disappointed to find the bank of 9-6 machines I had expected was gone from when last I played. I should have found out if there was better than 9-5 or 8-6 JOB. I'll have to get the payout schedules from other games and then look them up on Wizard of Odds before I would try this again.

My royal flush paid me $4,230.00. I was expecting $4,000.00. It turns out there was a bonus pot for a royal flush that I wasn't aware of. Further proof I'm a novice. Anyway, the bonus was so low that I don't think playing strategy would have been affected. A pro would know the bonus pot and alter strategy depending on the pot. I received a Form W-2G from the casino. If I show a profit from machine play and other gambling at the end of the year, I'll have to pay tax on my $4,230.00 win. This is starting to be a really bad deal. Of course, professional gamblers will be able to have business deductions.

I found out I am still bored by machine play. My hat is off to the folks that really grind out machine play. I think I'll give VP play a pass unless I find some really good promotional rebate or points rebate program. Others can write about how machine play is supposed to be scouted and done.

Where I live, we do have one progressive but it rarely gets high enough to mathematically justify playing. Unless you live next to that casino or have another source of advantage play, it's not worth exploiting. Another casino I know has 9/6 JOB at $5 level, but their 250 coin payout for straight flush is a hindrance thanks to those stupid W-2G laws at only $1,200 when it should be $10,000. Don't know how good their comps are, but it might be worth pursuing if you find one.