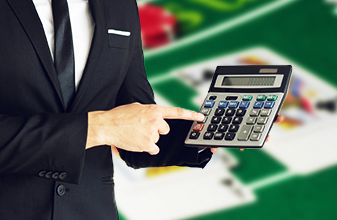 Let’s say a busy red chipper to low green-chip player needs a bankroll of $50k for his risk of ruin to remain acceptable. Time passes, and our player has been dumping cash winnings into his safe deposit box in $10k increments, without doing the required tax record-keeping. He now realizes he has $80k. Will just taking $30k in cash and buying a car cause problems with the government? Say he wants to reduce the bank back to $50k and wants to spend the winnings -- can it be done in a large amount or will he need to take other steps? In the United States, if he deposits more than $10k, of course the bank will be reporting it. How can he handle it without explanations?

Gustav Shoes: First off, the bank doesn't know what goes in and out of your safe deposit box. Auto dealers have to report cash transactions over $10k just like banks. Yes, the bank will file a CTR if you deposit more than 10k. Breaking the deposit up into smaller chunks may make you guilty of the crime of structuring.

Second off, if you made a profit and didn't declare it on your tax return, you are committing a crime; it doesn’t matter what you do with the money.

bigplayer: You should keep what you need for a 5% to 10% risk of ruin in cash (“trip bankroll”). You should keep an equal amount to that as a backup in an easily accessible form (savings account or whatever). A backup bankroll should include chips from casinos you are holding but need or are delayed in cashing out -- keep them in a safe deposit box or in a safe at home.

Chairman: To me, the "choice" to pay taxes in a field where you're primarily dealing with cash and keeping your own records is mostly a pragmatic one. Would you rather have $650,000 with which to use towards buying a nice house, car, vacation, and any other things which you enjoy, or a million dollars of cash stuffed into a mattress or buried in your yard which you spend every waking hour of your life worrying about and can practically never use? To some degree, what's the point of even having it? Look at how much stress even $30k is causing our hypothetical player.

Harold Harvey: Advantage players who cheat on their taxes by not reporting gambling income leave themselves open to blackmail by casino employees, many of whom blithely assume that all APs are tax cheats. Once you start down the road of income concealment, you have to worry about the banks, who are always concerned about federal regulators and IRS investigators; casino employee blackmailers; resentful APs and the Big Kahuna: the IRS.

If you ever want to use the legal system to protect your rights as a legal gambler, you have to approach the law with “clean hands.” Do the “dumb criminal” stories entertain you? You know, the meth lab operator who calls the police to report that someone has stolen his stash. Well, if you are a tax cheat, it is somewhat difficult for you to insist to the authorities that a casino has stolen $10,000 from you by refusing to cash your chips when the casino has video records of you winning $100,000 from them over the last couple of years and you know that you have reported none of it on your tax forms.

Don’t be a chump. Pay your taxes and clear your mind for more important matters, like winning more money from the casinos – and legally keeping your winnings.

In some US states, the tax laws are so horrendous that card counters are forced to resort to tax evasion, because if they followed the law to the letter they would pay more in taxes compared to income earned. For example: if you live in a state where you have to claim all your wins but you can't deduct your losses, you better be a multi state high stakes player or else you won't have much success without being more deceptive on your gambling records. Jean Scott, the Queen of Comps, has highlighted how brutally unfair the gambling tax laws are in her book "Tax Help For Gamblers", making AP work more closely resemble drug dealing than legitimate business enterprise. So much for filing a lawsuit in those instances. This in turn makes black chip play ($100-$1,500) out of the question due to the large number of CTRs and SAR's that result. Green chip play, you're playing with fire, because you'll have multiple transactions of less than $5k but high enough to warrant an ID request, putting you at risk of SAR's if you play too frequently or get very lucky in that casino. Red chip play, the days of red chip play is dying, unless you're fortunate to live in Minnesota, Iowa, or some other cheap state/small town, and you'll be making so little that they would almost never ask for your ID (unless they are super paranoid or kicking you out of the casino). In some casinos the number of tables and the table limits are so low that card counters are guaranteed heat, making a min to max bet spread the most worthwhile strategy.