Returning after a backoff 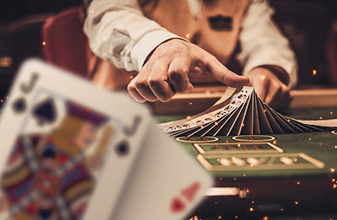 When you give them a name, they can link your name or search you faster than having a face with no name or record. When I’ve returned to the scene of a backoff; I’ve played very short sessions. Some of them have recognized me even if I was wearing a hat. I have waited a few months as well as over six months, and still would be reminded about the previous backoff.

Most of the time they again tell me I am welcome to play any other game but blackjack or tell me that they backed me off several months ago, and they would know my name even if I did not give a player's card or ID. The worst that happened to me is that a blackjack backoff would turn into a “no more table games of any kind” backoff.

Does returning to a scene of a backoff turn into getting 86'd if recognized? What is the best way to play blackjack at a casino that asked me not to play? Play really short sessions? Should I stop going to Las Vegas for a few years and then start back again?

I noticed a lot of pit critters, as well as dealers, work two jobs in Las Vegas. I am sure it happens at surveillance, too. Some of them have seen me at their second jobs. I talked to some of them about it and they tell me they are part-time at another or both and/or need the money, or for many other reasons. They told me there are a lot of dealers as well as pit bosses who work at two different casinos on different shifts.

I was backed off from blackjack at one casino and remembered having seen the pit boss at another casino, but couldn’t recall which one. A few months later, I went to a locals casino and I saw her as a floor supervisor there. I thought I was going to get backed off by her. Turns out she was only a floor supervisor there and I was not backed off, but I am sure she knows me. She looked into the rating screen, looked at me and left. I have never been back to that casino to play that shift.

The DOC: Watch the amount of your buy-in, and recognize that although they are not obligated to, they may well trespass you if you return to the blackjack tables after a backoff.

It’s time to travel more. Start hitting stores in other regions for a year or so before returning to Las Vegas. Give time to let things adequately cool off. There are plenty of stores to visit around the country while you wait to return to the venues that backed you off.

kewlj: I play the majority of my play without a card and never have any problems. I am rarely even asked about a card and when I am, I just casually decline. Something like, "No, I am only playing a few minutes" works well. It seems to the employees like you are doing them a favor by saving them work.

My experience has been that playing unrated is no more “suspicious” than playing rated, so it really shouldn't be a consideration in your decision. It should be about the value you place on comps vs. the increased risk of the casino knowing who you are. For me, that's different for different situations and stores. For example, I won't play rated at either of two large chains in Las Vegas, where one bad experience or incident can result in the loss of a number of games at many stores. For me, that risk far outweighs any benefits of using a player's card.

EmeraldCityBJ: Who was involved with the backoff? An important factor is to make note of everyone who was aware of the backoff. I don't know how much casino employees move around in Las Vegas, but do know that in some parts of the country, dealers, pit bosses, and shift managers are constantly moving from one casino to the next. If you can figure out when the person responsible for backing you off has moved on, that is an indicator of when you might be able to return. It's also an indicator of another place you should avoid if you know where they moved to.

With that said, this isn't a foolproof method. You never know how involved surveillance was in your backoff, and if they decided to put your picture on the wall of the surveillance room or put you on the front page of their book/internal website.

Memphis: I agree with kewlj. I play most of the sessions on Las Vegas trips unrated; often my telling the dealer I didn't have a card was the end of the discussion, with no questions from the pit. When a pit critter asks if I am sure I don’t want a player's card, I make eye contact with them and say that I don't have one and don't want one, and thank them for asking. What with all the attention to identity theft, I've had no problem stating that I was a victim of same and therefore don't wish to provide my driver’s license to get a card.

Cougfan: There are a lot of reasons to decline a player's card. Just think of all the possible reasons why someone might want to preserve their privacy and/or why they might not want any record of their gambling activities. Make a list and then choose the one that best fits your act and appearance. Use that if pressed on the issue. That said, your initial response should just be "No, thanks.” That should end the vast majority of the inquiries.