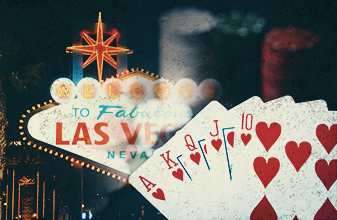 Most of today’s conventional wisdom says that Las Vegas has severely deteriorated as a card counting venue, and is so paranoid and hostile that numerous backoffs are inevitable. Here are some other views.

Wisereyes: A higher-than-normal back off ratio is not a given in Las Vegas. You can play blackjack in such a way that preserves longevity, your name, and to some extent, the games. Don't make the mistake of believing that just because Las Vegas has lost value for those employing a particular style of play, that it has lost its value for everyone.

Don't make the assumption that because many players avoid Las Vegas, that you should too. Maybe you should, maybe you shouldn't, but as is the case with most things related to advantage play, it depends. Mostly, it depends on your long term goals.

I don't fault some AP’s for avoiding Las Vegas or for making generalizations which only apply to their style of play. But I do caution players, especially those on the front end of the learning curve, to consider the source when interpreting such comments.

Las Vegas is still a regular stop for me and will have to deteriorate a lot more before I stop including it in my rotation. Sure it's tougher in some ways. Of course we must be more creative, persistent, and thoughtful to maintain or increase our edge.

No doubt, we must continue to adapt. But there is still some good news; adapting is what we do.

KJ: If I didn't know Las Vegas and was reading the typical comments, I would be afraid to play there. But I do know Las Vegas. Las Vegas IS my rotation. I play up to to mid black, occasionally high black, and play 70,000 rounds a year in Las Vegas. I get only 4-5 backoffs a year. Backoffs are temporary. I have only lost one store on a permanent basis.

To me, Las Vegas is a mentality, not a destination. Just about the time I moved here over ten years ago, bigplayer said something that has been the basis of my attack here: “The strength of Las Vegas is quantity, not quality." If you play short sessions, move around, as there are plenty of games, keep your top wagers and session wins at levels that are well tolerated and pit folks don't have to answer for, you will be golden in Las Vegas, even playing the same rotation week after week.

Ikthor: Almost all issues start with playing too long and/or taking too much money out, too frequently, from the same place. Each place has a pain/reporting/accountability threshold; often 5k for large places to far less off-Strip in local joints. Gauge your action accordingly.

If I want to pop into a locals joint and I always play black, I'm gonna buy in for $500 in green, bet $100, but in green, and bet a little chunky. Looking to snap off 2k and get out of there in under an hour. They tap me before, whatever -- make a note and visit them again much later. If I'm on the Strip, the goals go up a little bit as does their tolerance, but I'm still looking to play an hour or so max, and bolt (depends on place, history, shift, heat, time of day, crowd, etc).

There are still ways to skin Las Vegas

You just move around and hit and run. Unrated. Unless you want comps -- if you ever want to be a serious counter, it's not worth it. But it’s your call.

Just as a standard operating procedure, I will target a day across five or six shops while there. Sometimes fewer, sometimes more -- depends on the day and how tired my feet are, length of breaks, and whatever. There are so many places to play that in a 2-4 day trip you almost never have to play the same shop, and certainly not the same shop/shift. Even for longer trips it's possible to do so.

I'd certainly rather play in Las Vegas than places like Shreveport or Biloxi simply due to Las Vegas having more opportunities and more customers to blend in with.