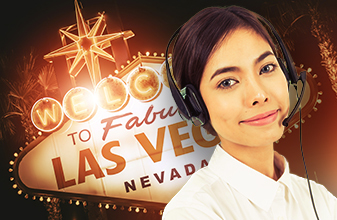 Every time I have visited Las Vegas recently, I have come to the conclusion that Las Vegas will soon reap what it has greedily sown for itself in the past couple of decades. “Take it or leave it” employee attitudes, rude employees, hassling people cashing chips, deteriorated table game rules, higher table minimums, ever-worsening video poker (and probably slot) payouts, pushing carnival games and gouging on entertainment (especially nightclubs) are finally taking their toll. This has certainly been going on for a while, but it really rang true to me when I saw many dead tables on a holiday weekend Saturday night at MGM. Or the completely closed pits on day shift at Bellagio. Multiple high-limit rooms on The Strip were staffed with suits and dealers in fancy costumes staring out into space and occasionally glancing at their watches. But if you wanted an audience to watch you play, you certainly had one.

Yes, there are people there but they do not seem to be spending much time in the gaming floor seats or creating lines to get into the outrageously expensive dance clubs. The National Beer Pong Championship gives you an idea of the budget for the typical Las Vegas visitor these days.

You may have wondered if only advantage players (“AP’s”) care about rules and payouts. Let me assure you that the minute I opened my mouth at Caesars to point out the bastardization of the blackjack games on the main floor, the dealers basically told me to save it, they are sick of customers telling them that the rules now suck and don't like hearing that the players are going somewhere else or worse yet, not coming at all. A floorperson and a dealer completely understood when a regular customer wanted purple chips instead of yellows and chocolates at Bellagio when coloring up because of anticipated hassles at the cage. So it's good to know that our concerns and the general gaming public's issues are very much the same.

So the big question is, could Las Vegas soon become a long-term deteriorating market like Reno? They better do something to give people a bigger reason to drive past their local Indian or riverboat casino on the way to the airport or it just might.

I'm not trying to suggest that a trip to Las Vegas is a complete waste of time. There are certainly opportunities available if you open your eyes and look for them. However, the point is that most Las Vegas casinos have an attitude problem. They assume that no matter how badly they fleece their customers, there will always be an endless supply of suckers coming into town. This attitude is going to continue to hurt Las Vegas - especially now that there are many other gambling destinations across the country who make an effort to be friendly and take care of their customers.

LV Bear: Las Vegas is a great place to live, but I wouldn't want to visit. As others have pointed out, patron harassment/abuse and bad attitudes are found throughout the city. There are exceptions, but not many. The constant badgering in most places for player's cards and the ridiculous harassment when cashing chips is unreasonable.

Yes, there are playable games left, but a fraction of what existed not long ago. And it gets worse every day. It is mind-boggling that not even one Las Vegas casino executive has followed the proven Bill Zender model, and improved its games to attract customers. I agree that the average patron (chump) doesn't care much about the conditions -- they complain but play anyway -- but an advertising campaign based on "Get a better deal at XYZ Casino" hasn't been tried. With casinos competing for shares of a shrinking market, no one has the courage to attempt this. Instead, the business as usual "let's fleece the suckers" attitude still prevails. Customer service is bad almost everywhere, and attitudes are still bad almost everywhere.

Handymn: I'm not talking about just the Las Vegas games deteriorating. As EmeraldCityBJ and LVBear mentioned above, I'm talking about the general attitude of the place. For instance, I have always noticed how rude Las Vegas employees are to the very customers that keep them in business. This even as a ploppy (which was for about ten years before becoming an AP).

Take a look at a Los Angeles high-roller tourist example: You and a group are going to a Las Vegas nightclub and you have made a reservation for a reserved table. It is demanded that you have to pay/tip the hostess to be shown to your table that they charge $1000 to cozy up to. Then you have the bouncer coming up to you to shake you down for "protection" money. They might even try to charge your guests to enter your area. You are shaken down by various other employees who stop by to "make sure you’re having a good time" and put their hands out. Then the waitress inflates the bill and adds a mandatory gratuity. The inflated bill is enforced with intimidation when you try to dispute it.

After all this, you go out and play at the tables. The pit gives multiple demands for your player's card or ID. Perhaps you don't want to get a card because your wife or significant other doesn't need to know you are gambling. After you’re down about $8k, they ask for it again and say you can't play more if you don't provide it and a Social Security number. You make a comeback but still down $3k, you color up and are given a $5k chip. You can imagine the problems at the cage from there.

And you are supposed to return again and again because they made it so much fun for you? I'm not talking solely about gaming rules and paybacks. It's a much bigger picture and a problem that Las Vegas is going to have to face in the next few years.

Floyd: The point about wanting the purples instead of higher denomination chips is especially true. At many Las Vegas casinos, I make a point of saying, "Just give me purple, I don't want to wait a half an hour at the cashier window.” I use that situation to make a point to complain about their intrusiveness when cashing higher-denomination chips.

I'm used to avoiding the tourism scams and ripoffs, although I love to take a shot at the pit person by saying, "Now this isn't that lousy tourist ripoff game that pays only 6:5, right?" or something similar as the situation presents. I have no doubt that in the future, Las Vegas will have to offer more value as a tourist destination and eliminate some of the scams and ripoffs.

Contrast the present to the way things used to be in Las Vegas as recently as the 1990s: I was there with my brother-in-law playing at a $5 table in a Strip casino in the morning. A floorperson came up to the table and asked if anyone needs a breakfast comp at the coffee shop. We said we hadn't had breakfast yet and he gave us a comp for two with no player’s card or ID demand. The city was geared towards luring and keeping gamblers happy with cheap/free food, lodging, and entertainment.

Today, it is geared toward separating tourists from their dollars as quickly and efficiently as possible. I think a lot of this has come about because of the emergence of Las Vegas as a convention destination. You have many people who don't gamble coming to Las Vegas for conventions, so there has to be a way to extract money from them. That, however, is no excuse for the club shakedowns and arrogant employee attitudes.

WRX: I recall a recent play at a Strip casino where I was giving substantial action and the casino had every reason to be welcoming to me as a “good customer.” When I politely questioned a request for personal information, the floorperson stormed off in a huff and proceeded to express great exasperation with me. Obviously, I was the bad guy for making his job more difficult. The pit's behavior was rude and offensive, the opposite of, "We're so happy to see you, Mr. WRX, what can we do for you today?" Would any big player in the old days have put up with this? What are they thinking? I expect to be pampered!

Pig Barber: I bought in at a high-end Strip casino and wonged into a shoe with a $500 buy in. The pit critter yawned, looked over, sniffed his nose in the air, snorted, "$500!" as if the amount was beneath his standards, shrugged and logged it into his station. The place was totally dead, other than the player I was glad to be able to wong in on. Pit critters and dealers were staring off into space, but this jackass snorted and belittled me for buying in. At least I happened to run it up to mid four figures and then left ... with a dismissive snort!

Captain Jack: If you think Las Vegas is bad, you need to face it folks: Casino gambling is NOT glamorous. There are very few places in this country where the service-based industry is more prevalent than manufacturing or retail. Las Vegas is one of them.

The proliferation of casinos has led to many casinos popping up in regions where nobody knows how to give proper service and nobody expects it. That's the larger problem.

Just travel to Atlantic City, where horrible service is standard. I can think of two or three occasions where I've walked out of a restaurant without paying because I had already waited over an hour from when I asked for my bill.

Just travel to any “racino,” where clueless employees are expected. They miscalculate hand-pays, give incorrect tax information, and will almost always know less about casino procedures than you do.

Just travel to the Caribbean where unless you bring protection, you better not be playing for anything significant. If you don't come across crooked casino employees, you'll probably be met by organized or unorganized crime right outside the casino door.

Just travel to Russia where the games are great … but your life expectancy drops significantly if you don't pay the proper people.

Just travel to other countries in Asia and eastern Europe where just getting in and out of the country with all your cash is nearly impossible. Las Vegas is still King compared to much of what else is out there.