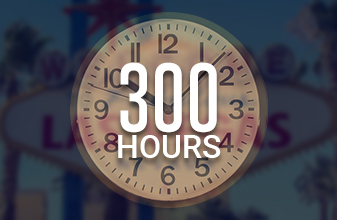 Well, I lasted only 300 hours or so of blackjack in Las Vegas at the high-limit rooms. I have great cover and a great act, and in the end none of it made much difference. First I was flat-betted at MGM, then very quickly at the Wynn, then one by one the houses all fell. I’m not sure of the exact method that was used for all the stores to inform each other, but it certainly happened quickly.

I made money close to the EV rate, but after taxes, plane fares, and all the other expenses -- all I can say is it’d be a tough way to make a living.

I came to despise the casinos -- jerks who want only the people too drunk or too ignorant to even have any idea of the right way to play the game. It doesn't really matter if you are a good card counter, a mediocre counter or a bad counter, if they think you are counting, you’ll be backed off, sooner or later. I would classify myself as a good counter with good cover plays and betting, but in the end, I was toast. Even a cursory internet search of my name shows that I am an affluent individual who could be a big contributor to the casino, but they didn't care. Obviously I knew how to play fairly well, so they all barred me. When they did bar me, typically they did it in a way that was completely devoid of class or courtesy. Why does it take several security people to tell someone discreetly they don't want their play? Some places did it better than others, but all, in the end, treated me like dirt.

Casinos are smelly, smoky, noxious places filled with desperate people, customers and casino employees alike. The dealers are mostly mindless robots who have seen it all; the pit bosses are just mindless. The casino management and security are thugs.

I learned how to play blackjack in the seventies and luckily gave it up to go into business. I came back to blackjack about one year ago when I needed to immerse myself into something fun. With the new software/technical analysis and some great help, I became a better blackjack player than I ever was before..

Blackjack is a magnificent game. There is a great mathematical symmetry about it, a great beauty that few ever get to see -- a glimpse under the lake rather than just the surface everyone else gets to see.

Well, goodbye blackjack. You dropped me like my first girlfriend did when I was only 18 and alone at a college far from home -- she broke my heart too. Now that I think about it, they both did it for the same reason -- neither one wanted me to use my brain.

I admire all of you out there who are beating the game for some real money, to make your substantial investment in time, effort and practice worthwhile. I will miss the anticipation of playing, every time you walk into the casino -- the feeling as we walk past the chalky, empty faces of those who have lost the best of their lives playing a losing game in the hopes of getting lucky one more time -- the feeling that we, at least, are there not only for ourselves but to avenge these lost souls, in some small way, taking our, and their revenge against these casino beasts.

I salute you all.