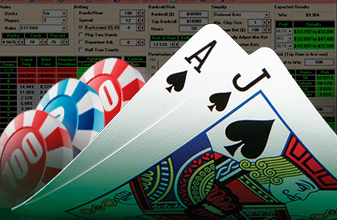 Most of us run simulations and have a pretty good idea of our Expected Value (“EV”) based on the assumptions we build into CVCX. And then there is reality.

After about 4*N0, I estimate my actual results are roughly 2/3 of EV. There are many possible explanations; rounds/hr, counting and playing accuracy, and not betting computer-perfectly (e.g. jumping from minimum to maximum if the count calls for it), and even after 4*N0, variance itself can still be playing a minor role. Finally, a sim that assumes you split tens and double soft 20 will yield a higher EV than actual results if you don't make those plays. (I try to run sims that reflect the plays I actually do make.)

So is this in line with your experiences over a comparable number of hands? Or do you find that you are winning at much closer to 100% of EV?

Should I be happy with results that are significantly less than the simulated ones after 4*N0?

I rarely jump from a small bet to a maximum bet on the next round. I also wonder if I really get an average of 100 rounds/hr. Someday if I have a non-playing partner, I may ask him or her to count the actual number of hands I play over a period of time. For all I know, the actual might be closer to 80 rounds/hr than 100. I have never gathered independent data on game speed. I just leave the default at 100 rounds/hr. I typically play at half-full tables. I rarely play heads-up as well as rarely playing at a full table. One to three others probably accounts for 90% of my hours.

I do not believe there is much opportunity to improve my counting or playing accuracy. So the offset is probably due to other factors like game speed, betting aggressiveness and maybe something else that I'm not considering. I think I'm good at assessing my actual playing time. If anything I might even under-report it slightly. So I tend to think of the CVCX sim of EV/hr as a reference point rather than anything I can truly expect to accomplish. Am I wrong in assuming a sizable “reality discount?”

Do you consider winning at 2/3 of EV to be acceptable and/or normal? Or is this a red flag that I'm somehow leaving too much EV on the table?

Chairman: I think the key which you touched upon is honesty in your sims. I think there is a tendency for players to run sims with rose-colored glasses, overestimating both the game conditions (getting 1.7 penetration but rolling with 1.5 because it's "close enough"), and of course your own willingness to spread, make index plays, not tip, etc. I know which plays/bets I am willing to make -- and not make -- and I generally count the number of rounds I play, so I have a good idea of what my real-world EV is. Being over 100% is just running good, but I'll take it.

I believe the reason less-experienced players run the rosy sims, aside from just being over-optimistic about their abilities, is because they are stimulated to see all the “riches they can make” -- a higher $/Hr figure justifies learning and playing the game. I'm just the opposite, I sim the worst case scenario as far as conditions I expect to find and what I'm willing to give away in cover; if I deem the game playable against this baseline figure, then I can only be positively surprised by great conditions and/or tolerance.

The Chaperone: I was always over EV as well. I attributed it to mostly averaging more than 100 rounds/hr, and secondarily to dealer errors in my favor. I'm extremely nocturnal, so I was almost always playing heads-up back in my grind it out blackjack counting days. This is one of the few professions where being a night owl is a good thing!

Bj21abc: After about 400 hours this year, I am 90% EV. I always try to be as realistic as possible when simming, plus I usually add in a factor of -10% or so for errors/unexpected. I usually time hands per hour at least once per session.

Having said all that, I am usually under EV. I have heard a figure of 66%-75% of theoretical EV from several professional players as to what you should expect long term results to gravitate to, perhaps for some of the reasons already mentioned.

Count Backula: Rounds per hour depends on lots of things. Is it an Automated Shuffling Machine? Does the dealer wait for every signal? Is he or she fast in general? How quickly does he scoop the cards?

I've played heads-up at only 80-90 rounds/hr with slow dealers. Yikes! But I've also played at 450 rounds/hr heads-up. You can forget about side counts with that kind of dealer. Better yet, switch back to HiLo if you know it.

A good rule of thumb is to usually assume 100 rounds/hr as a benchmark, and 150 rounds/hr heads-up. If a full table, assume 60 rounds/hr slow dealer, and 80 rounds medium-to-fast dealer. Fast dealer heads-up can be calculated as 200 rounds/hr.

Kewlj: Much like Chairman, I purposely underestimate my EV. I don't sim every game that I sit down at. I use a generic sim for each of several games that I play most often, based on the minimum condition, rules, and penetration that I will accept to figure my EV. I then go out and try to find better. Example: for a six-deck shoe game, I sim results at 75% penetration (1.5 cut off), which is the minimum I will play. But most six-deck games that I play, I search, find, and play better than 75% pen. As a result of this methodology, even measuring results in as short a time frame as a year, my results have topped EV each year that I have played except one.

It's interesting to see the way different players track results and the evolution of those different methods. Starting out my career playing mostly shoes games in Atlantic City, I began tracking my play by counting the number of shoes. Problem is, all shoes are not created equal. Heads-up versus full table, for example. Yes, I know … averages. But then, I adopted more of a short session, hit and run style of play, with aggressive wong outs of bad counts. This method really complicated things, as it was not unusual for me to exit a negative shoe after only three or four rounds. Therefore, counting shoes didn't make sense.

I then switched to time played. Due to my extreme style of play, I had all kinds of very small segments of time to add up: eight minutes here, three minutes there, five minutes, then twenty, then another eleven, followed by four minutes. Too much work. I finally settled on estimating hands played. After all, that's what it REALLY comes down to. So I now estimate my hands played based on the number of cards played (estimated by decks) divided by 2.7 cards per player. I still come up with some small segments to add up when I aggressively exit, but I feel it's reasonably accurate. I’ve settled in with this method -- I compare games by knowing that I make xx amount of money per 100 hands of this game, versus yy amount per 100 hands of that one.

EmeraldCityBJ: It's gone both ways for me. I've run below EV on some games/strategies, but over EV on others. I think this just goes to show that my sample size on any game is too small to really say much of anything, even after hundreds of hours of play.

With that said, I do believe that my EV estimates have improved with experience. The most notable inaccuracy in my early days was overestimating hands per hour. The numbers published years ago are no longer applicable to some of today’s games, where even one ploppy firing on a side bet is detrimental to game speed.

I agree with others that it's far better to underestimate your EV than overestimate. If you're overestimating EV, then you're probably underestimating your risk and setting yourself up to take on short-term losses which go beyond your comfort level.