Do Not Disturb signs 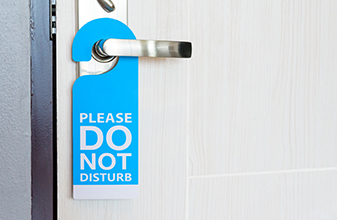 An advantage player friend once commented: I carry a DO NOT DISTURB sign in my travel bag for the somewhat common case when a hotel room doesn't come with one. Previously, I had resorted to just stealing one from another room’s door, but didn't feel good about it.

Unless playing at tiny stakes, most skilled blackjack players and other types of AP’s must frequently travel in order to be able to find enough games to make the pursuit worthwhile. Sleep during those periods is important! I, too, carry my own DND signs for those times when one is not provided by the motel/hotel. The problem is getting maids to respect the Do Not Disturb sign.

As a frequent traveler who stays in hotels around 150 nights per year and sometimes more, lack of respect for the DND sign is at the top of my hotel complaint list. With security concerns now high on any hotel’s list of things to worry about, particularly in tourist areas like Las Vegas, it’s gotten worse.

I place the DND sign on the door when I arrive and do not remove it until I leave. I keep my room tidy, reuse towels, carry extra toiletries, and for a variety of reasons, simply do not want hotel employees in my room. If I need extra towels, I catch a maid in the hallway and make the request.

Amazingly, some hotel maids simply do not respect the DND sign. I would put the percentage at around 5%, in some regions as high as 10%. Often, housekeeping will see the sign and avoid knocking, but then place a call to my room to make certain that I do not wish to have my room cleaned. "Do Not Disturb" really should mean, *DO* *NOT* *DISTURB*, or so it seems to me. A phone call is no less disturbing than a knock on the door. Because I sometimes sleep odd hours, I've learned to unplug my room phone in an attempt to keep this from happening. It doesn't always work, but it increases the odds of not being disturbed or awakened.

The most annoying lack of respect is the maid who sees the sign, but despite that, knocks anyway. It's often a sharp knock, the rat-a-tat-tat sound from a key card. This usually occurs 15 minutes to an hour before check-out time. This is a critical window of time for most guests, who are cleaning up, making phone calls, packing, or simply catching a few precious minutes of sleep before leaving. It's one of the most critical do-not-disturb windows.

I have considered the other side. Maids have a job to do and limited time in which to do it. I get that. Still, choosing to work in the hospitality industry means that customer's preferences -- like not being bothered -- should take precedence.

If I'm staying for more than a day or two, I typically and proactively inform the front desk and housekeeping that I will not require the services of housekeeping. Also, I let them know that I will check in with the front desk daily to let them know I am not dead, eliminating even that reason for entering my room. Despite all that, the word is not always communicated to the employees making that horrible decision to knock on my door.

Staying at a hotel or motel is not cheap, especially when the stays are a routine part of one's life. These are not the words of an unkind or intolerant person. Practically speaking, I lower my expectations as I go through my travel day because things happen on the road. I know it, I expect it, I plan for it. But on this one thing, I will not compromise.

The *primary* reason that customers choose to stay in a hotel is to get some rest and disrespecting the DND sign is one of the reasons that they sometimes don't. Ultimately I blame executives and general managers of hotels, who haven't put a high enough priority on training hotel employees to respect the DND sign. This should be one of the first things new employees learn and it ought to be communicated in no uncertain terms. Hotel managers, wake up!