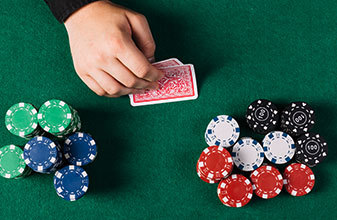 This blackjack play didn't involve an angle shot (to use a poker term), but certainly could have been interpreted as such by the pit crew.

I was playing blackjack in Las Vegas, heads-up at a table with $25 units. The count was good, so I parlayed to chunky green with two hands. I was dealt a 16 on the first hand, 15 on the second, with the dealer showing a face card. He peeked, no ace. I'm thinking...

He suddenly hit my first hand, and as he did I waved him off shouting "No, no, I don't want to hit." I protested, and he called the pit boss over. I told the boss I didn't want to hit the 16, and she glared at me. Not taking a hit was the correct play here with the true count being +3, but it's not basic strategy. It's particularly suspicious-looking since the card that came out was a 6, which busted the first hand but was the perfect card for the second hand.

"You don't hit 16?" she said to me. "Sometimes," I said, "but I haven't today." Which was the truth, actually, because I'd been playing light cover which involved always standing on 16 vs. 10 no matter the count, plus a few other low-cost misplays. The dealer, surprisingly, spoke up and verified that I'd been standing on 16 all day. So the pit boss let it go, ordering the dealt 6 to be moved to the second hand and then playing it out! I ended up winning both hands.

But this wasn't without cost -- the pit boss used language to the effect of "you get this one shot," suggesting she considered it a possible angle shoot. The truth is I was intending to stand on the 16 the whole time (the correct play), but delayed my signal because it was part of my act to look like someone who overthinks and makes bad decisions. But perception trumps reality in situations like this. The pit boss thought I was a cheater, so effectively I was.

I played a few more hands after that and skedaddled to the craps table, another light cover standard of mine (a la Ian Andersen's Burning the Tables...). I figured that after this, it was pretty much a given that my play would be analyzed in retrospect by surveillance, so it would be better to give them a small sample than a large. I'm happy to say that I've played dozens of times since at this same place, and am up several thousand there this year, and a few more thousand lifetime, and have not yet experienced any serious heat. However much I annoyed/concerned the pit boss on that occasion, it apparently did not end up on my "permanent record."

I’m sorry if my play in any way besmirched card counters’ reputation. We aren't cheaters, and we shouldn't be viewed as such. Next time I will probably just accept the result of the dealer error, and not involve the pit in correcting the mistake. The long-term cost is probably lower, as the real cost in accepting the erroneous result is simply the EV of the misplayed hand(s), not the actual dollar loss that might result from it.