Am I ready to move up in stakes? 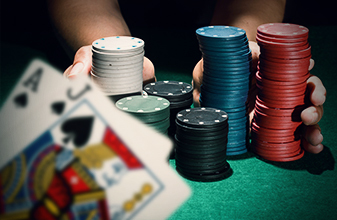 Until now I've been playing minimal unit sizes so that I don't walk into the game a total beginner and play above my abilities. Recently I've been feeling reasonably comfortable with my blackjack abilities: speed to count, number of mistakes, how I handle ups and downs, comfort making the “big bets” when called for, walking away when conditions are not worthwhile, etc.

I am considering playing to the full limits of my bank while staying within acceptable risk and casino tolerance levels. My objective is to supplement income given a replenishable bankroll. What should I be looking at as indicators that I am ready to proceed? Then, assuming I pass the test, what are the things that surprise most players making that second leap? The first leap is just starting to play.

The Doc: I too have a replenishable bankroll. When I first moved up in stakes, the two most striking things I noticed were:

KewlJ: The fact that you have the bankroll to play at a higher level but have resisted, indicates that you are going about the whole process the right way.

I really have only made one significant jump in my career, going from low-stakes red/green to moderate-stakes green/black. But there have been different levels within those stake levels, moving up to higher top wagers. As The Doc said, it takes some getting used to each time, especially if you are jumping from red/green to green/black. The same 30 max-bet swings just seem like a much bigger deal.

There are other differences as well. As The Doc said, higher-level games often have better rules and conditions and are often less crowded, which are benefits. But they are also watched more closely, so you have to get used to that as well. Maybe even make adjustments to your game, like not expose yourself as much.

LV Bear: The additional scrutiny often quickly turns into hostility. I made my "second leap" well over a decade ago. I believe the change from the typical fake friendliness of pit personnel to open hostility is much quicker nowadays than when I went through that stage.

EmeraldCityBJ: The most noticeable difference you'll see when increasing your bets is the sweat/heat level. All casinos have "magic numbers" which trigger additional scrutiny of the player, or even the game itself. Here is a list of magic numbers:

At many casinos, $100 bets get the pit interested, and $500 bets (or table max bets, if the max is less than $500) gets folks outside the pit interested. The session win and lifetime win numbers vary wildly from one casino to the next and are not as obvious. Observing how much ploppies bet is sometimes an indicator (e.g. how long will it take the casino to win enough from ploppies to cover your win?), but this metric doesn't always hold true. I've seen red-chip sawdust joints willing to get their teeth kicked in with five-figure session wins, while places that get heavy green-chip play start behaving irrationally when someone has a modest four-figure win. Building a network of other AP's who have hit these casino pain points ahead of you is perhaps your best indicator.

As you raise your stakes, more of these magic numbers are going to become a factor for you, and you need to think about how you want to manage the additional scrutiny. One option is to just blast away and let the inevitable backoffs happen. There are a number of AP's who always take this approach. Another option is to go for longevity by employing cover and/or setting a stop-win amount that is below the casino's pain threshold. If you go this route, you should carefully analyze the cost and effectiveness of any cover plays you decide to use.

Your aggressiveness will likely vary from one casino to the next, and from one game to the next. If it's a local casino, you may want to utilize cover and go for longevity. If it's a remote location you plan to visit only once in your entire career, it might be more appropriate to just blast away and take the backoff. If it's a mediocre game, you probably can’t afford as much cover. If it's a great game, you might opt for an extended set of small session wins rather than going for the kill, which prematurely ends a long-term opportunity. If it's a promo game that's so great it can't last even if you do nothing, you want to hit it hard and get as much as you can before it is inevitably killed.

Wham: EVERY casino has a list of these “choke points” where the pit boss is notified, where surveillance is required to do a skills check, and where the shift manager is notified.

I started at the red-chip level and was very fortunate to start winning immediately -- in fact, it was pretty ridiculous as I was winning most of my sessions and had very few big losses. In my second year, I started playing a little green chip and once again I killed it. I had a few larger losses, but nothing like the horror stories I’ve read about on Green Chip.

The year I started playing mostly green and black chip, I thought I was immune from major negative variance. I was rudely made aware that I am not! I lost 40% of my bankroll in two weeks. It was pretty sobering, to say the least, but I knew I was playing a winning game. When there is only one “5” left in 50 cards and it comes out to beat you, it’s just negative variance and it happens ---a lot. So be ready for some horrific downturns. It will happen and it doesn't matter where you play or what you do. Keep your chin up and be positive, as it will turn around. Good luck!