The Math of Tipping 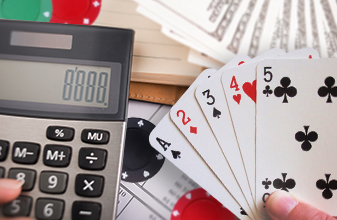 Many card counters and other advantage players tip too much. Let us look at some numbers:

To put it into perspective, your long run index is proportional to the square of your EV. If you retain only 81.5% of you EV after tipping, then your long run index is only 66.5% of its non-tip value. That is, if you are playing a game with a N0 of 200, your tipping has raised it to a N0 of 300. You have to play 50% longer to get the same effect.

Here is another way to think about it: Not only have you decreased your earnings by 18.5%, but you have increased your Risk of Ruin. You are making less money, with more risk.

My own view is that the long run index in blackjack is too long as it, and it should not be increased cavalierly. Some increase is necessary for longevity, but it is important to keep it in perspective.

Having said this, there is another way to look at things. Most low-stakes players spend a far greater sum on expenses than they do on tips. Sometimes this is justified as “vacation money” that should come from a separate fund than bankroll. If you are spending money to travel to, say, Las Vegas for “entertainment” then you could consider tips as part of the cost of entertainment. I think it’s funny that some players will think nothing of spending a couple hundred bucks or more on airfare to get in ten hours of play (costing $20-$30 an hour), but then begrudge dealers $5 an hour in tips.

However, some counters are playing at low stakes to gain experience before moving on to higher stakes. If you are in that category, it's important to develop good habits for the future. Understanding how much tips cost you is part of the issue.

At low stakes, non-tipping is less noticed. I do hear dealers say things like, “A player who was here before took away $5000 but didn't give me squat.” Non-tips on big wins are noticed, and are talked about in the dealer break room. Many dealers have a sense of entitlement to tips. But I’ve never heard a dealer complain about a red-chip player who didn't tip. Perhaps they do in grind joints where most of the patrons play red chips.

If you gave a good-penetration dealer two red chips at the end of your session, how did that help your penetration? You had already gotten the good penetration before the tip.

If you are tipping during the session, then I would suggest breaking down your reds to $1 chips, and making several bets one dollar at a time. I think you would get the same effect by making five one-dollar bets. In fact, it might seem better to the dealer.

The amount of money that individual dealers make from tips is almost negligible. Maybe that guy had to pool his tips with 20 other people. So your $10 gave him half a dollar more in his pocket. (If the dealer doesn't pool the tips, which is rare, then we have a different situation) However, many dealers like the “action” and enjoy having a bet in the game. Also, if you make five bets for the dealer in the session, then the dealer sees you “tipping a lot.” It creates a good impression.

By the way, I think that five bets of one dollar each is still a lot. Many professional players don’t tip at all, except in special circumstances.

I hate tipping in casinos! It's despicable.

Dealers are spoiled brats who think they are entitled to other peoples' money, especially when they are winning.

To make things worse, tipping is used to distinguish the advantage players from the suckers.