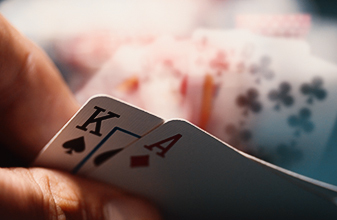 The tables in the text of Professional Blackjack base playing strategy on total points in your hand and not on which particular cards make up your hand. The additional dollars per hour you can win by knowing two-card strategy numbers is essentially zero, particularly with multiple decks.

Here is a tip for decisions when whether or not to take another card is a toss-up. If the count is negative, take the card; if the count is positive, do not take the card. The reason for this advice is: The more cards that remain to start the next round, the more likely it is that there will be a next round.

You will never learn to play perfectly like a computer. The computer will spot correct deviations from basic strategy that you would never catch. For example, a computer can spot situations in which splitting 3-3 against 10 is the correct decision; all that is necessary is a big excess of 8s and 9s in the remainder of the pack. The systems in the book say do not split 3-3 against 10, because a count of 8s and 9s is useful for few other decisions. You can never play as well as a computer, just almost as well.

To win in casinos you must make decisions quickly and accurately. It is not advisable to use a counting strategy in a casino if you cannot play quickly and accurately with it. No strategy modification will yield big gains over the high-low system. If you want to play several hours in a day, you cannot use a strategy modification that you find tiring. Keeping two counts is more tiring that keeping a single count, and keeping three counts is considerably more tiring.

I like to use a simple counting system so that I can play long hours, talk with other people at the table, keep an eye on the pit boss, and not get exhausted. When I first started playing blackjack, I used Thorp’s 10-count, which involves keeping two running counts. I made money with it, but it was a lot of work. Then I switched to the high-low, and not only did I make money faster, but the effort of counting seemed to be reduced by 90%. Now I use the halves count, which is only a bit more work than the high-low and (for me) worth the extra effort.