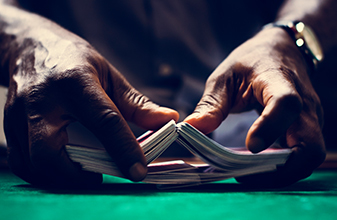 Penetration in blackjack, or how far down into the pack the dealer goes before shuffling, is extremely important. I always knew it was important, but I learned from the mass of simulations I have done that penetration is even more important than I had originally realized.

As mentioned earlier, the effect on your win rate is the same as if cards already dealt but not counted were behind the cut card and would not be used. For example, sitting down to play in a six-deck game with one deck cut off and one deck already played but uncounted is the same as sitting down at a six-deck game with two decks cut off. Six decks shuffled and one cut off is playable, but six shuffled and two cut off is a waste of time unless the rules are so good that you have an edge with basic strategy alone. Such a rule set is extremely rare nowadays.

On double deck, penetration is so important that if you are in a casino where there are big differences from dealer to dealer on penetration, you ought to make sacrifices to play against a dealer who gives the best penetration. For example, in double deck you should rather play at a table with a couple of other players and cards dealt almost all the way out than heads-up with a shuffle after only half the cards are used. If a dealer who has been giving excellent penetration gets switched to another table, and the next dealer does not give as good penetration, you too switch to that other table after waiting a few minutes so it isn’t so obvious to pit personnel.

In many casinos, every dealer gives bad penetration. Do not even bother to play blackjack at those casinos. If you happen to see a big excess of small cards on the first round after a shuffle at such a casino, jump in and play until the count goes negative. But keep telling yourself you are wasting your time because the shuffle will come too early, robbing you of the rounds with the most profit potential.

Penetration is one of the many factors of game quality listed in Current Blackjack News.

Why avoid casinos with bad penetration if you've been burned out of many places already and have little to no alternative options? Using huge bet spreads that are almost guaranteed to get the floor's attention is almost always an alternative option. Blackjack Apprenticeship members of the Church Team played super aggressively like that in some casinos. Ken Uston justified it once at Circus Circus, pretending to be a Hoover Dam worker successfully, and many other players did that successfully as well.