Annoying traits of some card counters 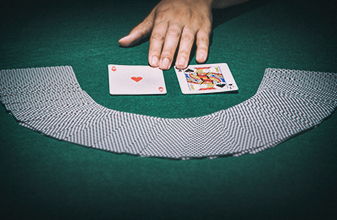 I've seen a lot of inept card counters in my day. One annoying thing they do is look at everyone else's hand, especially on a close insurance decision. With multiple such counters at the table, they all show each other their cards. If I am trying for some reason to get in good with some local high-roller (loser), I do that; otherwise, I never do. Why not? Because:

Showing cards in a counting context doesn't have much benefit, certainly not enough to offset the negatives above.

As primarily a hole-card player, I have observed many counters in the wild, and to put it nicely, I am not impressed. The level of tunnel vision, carelessness, and laziness is astounding. Counters complain about conditions or the difficulty in finding opportunities like hole-carding, but I've seen time and time again that they're just not looking! It's ridiculous. On top of that, virtually all of them have the same annoying table habits and make the same rookie mistakes that have been posted and written about ad nauseam. You know how many times I have hole-carded with counters on the adjacent table or at my table? They are oblivious.

They refuse to follow advice in books and on Green Chip, inexplicably preferring to make the mistakes themselves.

They spend endless amounts of time debating tired topics that have so little to do with their failures -- what count system to use, how many standard deviations of bad luck did I just have? Geez, are you kidding, man? If these are the permanent topics, you'd better find a better game! When highly-respected counters can have a losing year, what does that say? Well, many have.

Perhaps you could label the following as pet peeves, but when you see them over and over and over again, in what regard would you hold these counters?

Here are the top five mistakes that riffraff counters make, despite advice in many books and Green Chip posts:

It is SOOOOO difficult to look at an "Inadequate" Card Counter" and immediately surmise that you know exactly what mistakes he is making.
The truth is some of your article is true
..... HOWEVER I have witnessed so many "Bad Counters" Making mistakes only to learn later they were exploiting a Game in a completely different way.
Sounds like YOUR being the annoying, whining counter in this article.
"after all only Fools make Conclusions".

I really thank you for your post, we can all learn from each other :D