A thick skin is essential to successful blackjack play 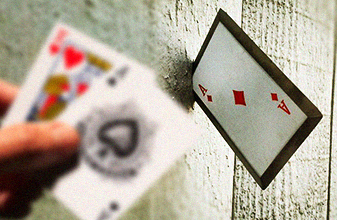 One of the prerequisites for blackjack card counting that isn’t discussed enough in the literature is a thick skin. I would like to comment on this, as recent occurrences have made me think about one of my favorite things about blackjack -- venturing into a new casino and flat betting or low spreading it for a while with a mid-sized bet at reasonable stakes.

I like to get those first few entries into the rating system, chat with the floorpeople, and enjoy myself. Quell suspicions. Make friends. Tell jokes. Goof off. Everyone likes you and everyone is your friend. You have to admit that it’s a good feeling. Unless of course, you realize that they just think How to of you as another wallet with legs, another way to boost the drop, another sucker under their wing who will be eating $10 meals for “free” at the inflated charge of $50 and thinking they're getting value. You’re just another sucker. And remember, they only like you when you think that you're a sucker.

Because then the fun starts and hopefully you play and play and play. But then the fun slowly deteriorates -- you may notice that slowly people are less and less friendly. You start getting those quizzical looks from time to time, and happiness to see your face is gone because now you're just another chump. Another chump whose face is no longer fresh but just another one of the suckers. Your host now sometimes bugs you that they can't set you up as they used to and you have to play more. (Sometimes hosts are nice, though. But I hate it when I am "losing" and I think they really like me. Because I can tell they are hurt I am losing and they think I'm just another senior losing his retirement although I was ratholing chips and will eventually win.)

And then now it’s less fun. You got backed off down the street a month ago, which told you that you were pushing it, but you know you use the same spread and game and act everywhere, and wonder if they know here that you’re not really a chump. You hated getting the kick cause you couldn't do anything about it. You know you deserved it, and they know you deserved it. You can't argue. And when you left, your friends weren't your friends anymore and you long for the days of yore when everyone liked you.

And you may not like your act and may begin to dislike doing it. You pester and pester for comps as a disguise to play for higher stakes. You act obnoxious and dumb to keep people away from your table. You may dress in a way that you do not like. You would like to occasionally tip and maybe not jump your bets so much, but that costs you. The phones seem to ring louder and louder each time you sit down. You miss the time when they liked you and you forget that they only liked your money that they thought would soon be their money.

And then they've had enough. And sometimes they’re not very nice about it; you feel insulted and rejected and want to tell them all to buzz off -- you want to call them a bunch of money-hungry, greedy pigs, but can't because you're supposed to leave quietly and politely so they don't remember you or tell anyone else that you are now unwelcome.

So please remember when you are playing, diminishing popularity is part of the job, and something you will run into in many aspects of life. Keeping this in mind may help you to maintain the positive attitude and sharpness that will not only make it easier to take the money from the casino, it will also make it more enjoyable.