Alternative to traveling with cash bankroll? 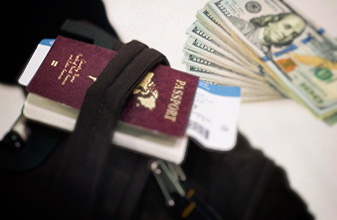 Does anyone use a large national bank chain where you could withdrawal funds in the town where you are traveling to play blackjack? Going to the bank in Las Vegas seems less of a risk than flying with a sizable bankroll. An alternative would be to wire the funds to your home-base casino, but I have never done this. Any downside to either choice?

Hypothetically, for a week-long trip requiring $40-50k, it’s a lot to have on the plane and you may have to hold it over your head during the body scan. Not ideal. If your flight arrives at night and you are renting a car then there is risk making it safely to the hotel with your bankroll. It would be less risky to go to the bank during the day and then store what you don't need immediately in the hotel safe. I understand the concern about identity at the casino, but would only consider this in a home-base casino where I play only minimal +EV / break-even blackjack for comps.

bigplayer: Keep your bankroll in cash or in a safe deposit box. Do not pull it in and out of the bank -- the most likely consequence of this is that the bank’s risk management department will tell you that they don't want your business anymore and your account is being closed. Buy cargo pants and spread $10K packs around in all of the pockets.

Wiring funds to a casino gives the casino your identity and as a blackjack player that is the last thing you want to do. Keep your money in cash and chips.

Sammy Boy: I always keep my cash in my carry-on, separate from anything that could trigger a search. Never put chips in the same bag as your cash because they will almost always cause a search of the bag. I keep my chips in a ziplock bag and put it in one of the gray bins to go through the x-ray machine. I have never had a problem doing this. Never, ever check a bag that has your cash in it. You have to assume that a rogue TSA employee will find it and steal it.

You are perfectly within your rights to carry as much cash as you want, so don't feel guilty. If you are cautious and stay aware of your surroundings, you can reduce the chances of being robbed to nearly zero. A problem we have is complacency -- we become too comfortable carrying cash and can forget that we're even carrying it. You must remain focused. You cannot become preoccupied with your cell phone or any other distractions. After cashing out chips, I never go straight to my car. I always walk around the casino in a manner that would alert me to anyone watching or following me. If something just doesn't look right, I ask for security to follow me to my car or just hang out in a safe place.

On the subject of banks, what you propose can work for partial amounts, but banks are not open 24 hours and it can be a real hassle trying to get your cash when you need it. I’ve had to go to two different branches to get only $20k because it was last minute and they did not have much cash. Also as bigplayer says, you really want to avoid numerous cash deposits and withdrawals. Banks have many times closed the accounts of advantage players because they don't want the perceived risk.

If you follow my advice with airport security you will be fine, but if for some reason they want to tear apart your bag and they find cash, remind them that there is no law against carrying cash.

Count Backula: Don't use banks; just take it on the plane. Don't put $50k in your cargo pants. Instead, put it in your carry-on bag. Don't put anything strange in that bag that would trigger a search. Laptops, any liquids, any large electronic devices. None of those. As Sammy said, if you have chips, leave those out as well. That's pretty much it. It would be very, very hard for TSA to search a bag that obviously has nothing interesting in it.

Harold Harvey: Put the bankroll in a cash bag. Drug dealers and couriers often wrap their drugs and their cash in multiple layers of plastic in an effort to kill the scent and thwart drug-sniffing dogs. Don't use plastic bags; just use a cash bag. Do not give TSA or their DEA friends any reason to claim that the cash was "concealed." It would be rather difficult for a DEA agent to argue successfully that cash was "concealed" when it’s in a cash bag. Put the cash bag in a lockable briefcase. Lock the combination locks. TSA cannot get into the case unless you stand right there, open it for them and then watch them like a hawk while they paw through your stuff. Carry the briefcase onto the plane with you. If you are a traveler who likes to take a nap between planes, handcuff the locked briefcase to your wrist while snoozing. As others have remarked, TSA is no longer the problem that it was a few years ago.

EmeraldCityBJ: As others have suggested, the best bet is to come up with a safe way to take the cash with you on the plane.

I've tried the bank deposit/withdrawal thing a few times, but daily withdrawal limits and banking hours are a huge hassle. Most smaller bank branches have a $5k daily limit, and for the larger branches, it's still only $10k. I expect in a place like Las Vegas, you might find more banks with the higher limits, but pretty much everywhere else, you're probably looking at going to several branches and making maximum withdrawals. I can only imagine the red flags that a half dozen or so $5-10k withdrawals from multiple branches in a 24-hour period might raise, especially since they are each individually below the CTR threshold.

With that said, I do think banks are a reasonable way to manage cash on your return trip, provided you don't overdo it to the point that they close your account. While withdrawals are limited because of cash on hand, I've never been told I can't deposit the $20-30k I have with me. I still have to deal with getting the cash out of the bank at some point, but that can happen after I've returned home and have more time to deal with my local branch. Most branches will allow you to exceed their withdrawal limit if you plan ahead, tell them how much you want to withdraw, and give them time to order the extra cash. When doing this, I always ask them to call me when the cash has arrived rather than have them give me a date. I don't want to know any of the specifics around the day/time the armored truck arrives with the delivery.