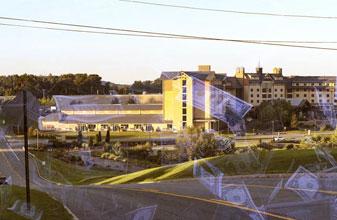 The Pennsylvania bank run by tycoon Louis A. DeNaples issued a $50 million loan from a taxpayer-funded initiative to assist mid-sized businesses during the coronavirus pandemic. The Mount Airy Casino Resort, which is held by trusts for DeNaples' children and grandchildren, was the recipient. To address allegations that he disguised his links to organized crime, DeNaples had to divest himself of his own interests in the casino.

FNCB Bank's loan to the casino cast an unfavorable light on the federal government's pandemic approach of deputizing banks to make loans under its Main Street Lending Program, which was authorized out of concern that lenders would stop backing even prosperous enterprises.

Analysts stated that small banks such as FNCB are not qualified to examine repayment risks and other possible dangers associated with providing the enormous sums of debt authorized under the government scheme. If borrowers default, it is primarily the public's money that is at danger of being lost, not the bank's.

Regulatory documents indicated that DeNaples is the chairman of FNCB and its largest stakeholder, holding a 9.2% interest in the bank. His son Louis A. DeNaples Jr. serves as vice chairman of the bank's board and is the beneficiary of one of the seven trusts that jointly control the Mount Airy casino.

The financing may not have even been conceivable without the Federal Reserve and Treasury Department's decision to exclude the Main Street program from long standing norms prohibiting banks from providing taxpayer-backed loans to firms controlled by its directors. Braden Perry, a lawyer specializing in banking compliance, stated that it might still trigger the federal limitations on insider lending that apply to all regulated banks and are known as "Regulation O."

Seven years ago, the bank paid $5 million to shareholders and their attorneys to settle a lawsuit alleging that it ruined the company's stock price by lending millions of dollars to executives who then defaulted on the loans.

In 2005, DeNaples, whose vast commercial empire has included car salvage yards, heavy-equipment sales, and towing services, applied for one of the state's slot machine licenses in order to enter the casino sector. He intended to convert the historic Mount Airy Lodge in the Poconos into a casino resort.

In 1978, DeNaples, a prolific political donor, pleaded no contest to allegations that he and three others had deceived the federal government. However, he was not disqualified due to a loophole in Pennsylvania's gambling legislation that exempted applicants with convictions more than fifteen years old.

His casino license was secured in late 2006, and he launched his resort about one year later. In early 2008, however, he was charged on perjury charges, purportedly for lying about his ties to mobsters such as William D'Elia, the former head of the criminal family of Northeastern Pennsylvania boss Russell Bufalino.

In exchange for the dismissal of these charges, DeNaples was compelled to transfer management of his casino to his adult daughter, Lisa DeNaples. But Louis DeNaples was permitted to continue serving as the casino's advisor. According to public documents, ownership of the casino's parent business, Mount Airy #1 LLC, was then split evenly amongst seven trusts in the names of DeNaples' children and grandchildren.

Over the years, DeNaples has also frequently petitioned state gaming authorities to let his firms offer services to the Mount Airy resort, including garbage disposal and vehicle maintenance. These claims were denied on the grounds that his agreement to transfer the casino prevented him from benefitting in any manner from the resort. A spokesperson for the Pennsylvania Gaming Control Board declined to comment on whether the loan was granted in violation of these restrictions and what penalties apply if it was.

Mount Airy had mapped out a now-defunct plan to develop and operate a second mini-casino in Beaver County, some 300 miles to the west, under the state's 2017 gambling-expansion law, which permits gaming corporations to create smaller satellite casinos.

The gaming board ruled that Mount Airy had “utterly failed to produce any evidence that it can satisfy the financial fitness requirements for this project” since no bank would finance the $50 million-plus project.

The lending program was created as part of the financial crisis legislation to assist firms that were too large to qualify for the more well-known Paycheck Protection Program and too small to benefit from the Federal Reserve's massive purchases of corporate debt. Contrary to the PPP program's forgiving loans, Main Street program monies must be repaid. Loan criteria are stricter, requiring participants to have been in sound financial condition with sustainable debt levels prior to the pandemic.

Banks are permitted to allocate 95% of the debt they incur under the scheme to the government, therefore reducing the risk to their own assets. During what was anticipated to be a protracted period of restrictive credit, the goal was to reduce banks' reluctance to lend. Chris Marinac, a research director at Janney Montgomery Scott LLC who examines banks, stated that it was "excessive" for a bank of FNCB's size to make a $50 million loan, even if just $2.5 million remained on its books.