Do you ever respond to casino surveys? 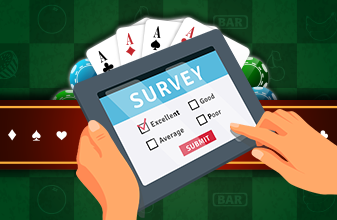 Question by 21forme: Do you ever respond to casino surveys? I got one via email recently. Just wondering if anyone fills them out. If so, do you complain about lousy rules, poor video poker pay tables, etc?

Rockky176: Sometimes, but not about penetration or not flashing :)

EmeraldCityBJ: It can't hurt. As long as the survey is anonymous, there is no real harm in filling one out. If you leave written comments, it will be most effective if you use "ploppy-speak.” For example, referring to a machine as "tight" or explaining that your $500 budget never lasts as long as it used to is probably going to be taken more seriously than using phrases like "9/6" or "only 98% return.” For table games, asking for better rules or requesting a new game is the best approach, especially if you can mention by name a neighboring casino that has the favorable conditions. Lastly, I would suggest offering some feedback which isn't specific to game conditions. Comment on the service, friendliness of the staff, parking, restaurant offerings, and other things which are usually secondary to us as advantage players, but often a primary concern for ploppies.

ihate17: I mention that the casino needs to offer better comps and better rules. Always, I do comparisons between the surveying casino and what I see as their competition. At one casino there was a case where they had no double-deck games but a nearby casino had about six tables that were full and they were all $25-$100 minimum games. I don't know if my survey helped but they did put in a couple of DD tables.

Complaining about comps, real or imaginary, I feel is a proper ploppy thing to do, so I require my doing such whenever I bother to fill one of those things out. I am hoping that even though I probably will not get the comps it will be good cover for when I at least let them know I am aware of better rules, for instance in complaining about a certain place that only let you split once, while you could go to four hands at its neighbor.

Spade: Sometimes they really listen to you. A long time ago I answered a survey from the Hong Kong Jockey Club and told them that they should promote their horse racing course as a tourist destination and offer tourist tickets to foreigners and such. I was joking, but they did it.

Another time years ago, I was giving feedback to the Singapore tourism group on how to rejuvenate the secondary island Sentosa to become a tourist magnet. I told them that it needed an integrated resort with pop star concerts and a casino. That was exactly what happened after, although it took quite a bit of time before the government approved casinos and such.

Knights of the felt: I had a few big wins at my local casino one day, and as I was leaving some guy at the door gave me a survey to fill out. He said it was for an assignment he was doing for university, had questions about if I believe in luck, do I bet on impulse etc. Is this some kind of trick by the casino just to get information out of me? I went back about 30 seconds after I filled it out, but he was gone.

Bootlegger: Why did you fill it out? Usually, my first thought about anyone who approaches me at a casino entrance is that they are trying to sell me something, usually a condo timeshare. This fellow may or may not have been legitimate, but if you were suspicious, why fill it out in the first place? My personal policy, especially in this day and age, is to never ever give any sort of personal information to a complete stranger with whom I have no business nor any intent to do business. Even in business transactions, I give the absolute bare minimum.

EmeraldCityBJ: In the case of someone asking me stuff at a casino, I'd try to answer the questions in the way a typical ploppy would answer. If asked about believing in luck, I would answer in the affirmative. If ploppies didn't think they were going to get lucky, casinos wouldn't exist.

If asked about how much I won or lost, I would say I broke even or that I lost a little. You don't want to admit to a big win (they are rare among ploppies), and most ploppies are going to be too embarrassed to admit that they just took a big loss.

If asked about using a system, I'd describe some sort of progression system or make up some nonsense about raising my bets when I get a “lucky dealer” or good “flow of the cards.” I would not mention a “system” by name (e.g. I wouldn't say I Martingale since most ploppies have no clue what that means). I might also tell them about how I determine where the “hot slots” are placed.

Ace Hunter
December 17, 2018 9:28 pm
Re: Knights of the felt. That survey does sound like something a high school or college would do. When I was in college, we had a similar term paper assignment, to interview ladies about bakery goods. It was fun, and resulted in some useful marketing information.