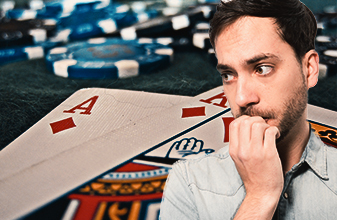 I've wondered whether it is practical or helpful to have in mind a loss limit, such as, "If I lose X amount (either for a session or trip), I'll stop..." In the past five years of advantage play, I have managed to bulldoze my way through losses, but recently I experienced a losing streak in a one-week blackjack trip that forced me to really tell myself, "Okay, I’m done for the trip."

Looking back, I think there were times that the bleeding eventually stopped if I just accepted the session loss and moved on to another casino, rather than being stubborn and fighting through. But it seems like this time, every store was a kick in the teeth.

Putting aside heat or busting trip bankroll, I'm wondering what other factors you take into consideration when deciding whether to cut a session or trip short due to a big loss (relative to your bankroll)?

Rockky176: Losing streaks are a retrospective phenomenon. If you are losing, you need to make sure you are playing a winning game and you are betting appropriately to your bankroll. So, if you’re losing a lot, downsize according to Kelly criteria that you are using. Stopping playing will not reverse your losses or magically make you win on the next trip. However, you should stop and take a break if you emotionally cannot handle the losses.

Hodger: One thing I learned the hard way is that repeatedly buying in to games is a bad idea from the standpoint of cover. You typically don't see players buy in four or five times at a given table. Typical casino customers will get up and leave after one or two buy-ins. I am very methodical about playing my “A” game all of the time and losses don't bother me much. I learned this paying high-stakes poker. However, I have been the victim of casinos realizing this pattern is highly unusual, resulting in my getting backed off. I now limit my buy-ins at any table/casino/shift, though obviously I never leave in the middle of a high-count shoe.

DM21: On a recent trip, I had this happen: I had a decent win on my first day but endured many sizable losses over the next four days. I was playing a mix of shoes and double deck. When my trip bankroll got too low to play shoes, I focused on double deck. But it got too low to even play double deck, essentially tapping me out with two scheduled days left. It was a sizable portion of my overall bankroll, about 30%. I usually bring much more than I need, but you never know how badly you are going to get crushed. This was the first time I had ever tapped out on a trip. If I was in that situation again, I wouldn't change how I played it. I keep betting optimally to my overall bankroll instead of trying to nurse my trip bankroll to make it through. It usually turns around at some point, but just never did on this trip.

bigplayer: When I used to play many pitch games, I limited my loss versus any particular dealer in case there was something fishy going on (casino cheating). I strongly suspect I was cheated a couple of times while playing single deck years ago in Reno and in Louisiana, but I can't prove it. Stop losses will at least limit the bleeding in situations where you're being cheated.

Stop wins, especially low ones, are a terrible idea. If you have a moderate stop win, you're more than likely going to be backed off on return anyway, so your name will be dirty and you'll never know it. I'd rather blast away until they get tired of me. If you have a giant win and get out of a place cleanly, you should probably just trash that player name if you're not already playing anonymously, then stay away for a while.

Most of your backoffs will come while you are losing, not while you are winning. Why??? Because when you're repeatedly buying in during high counts, you're getting the most pit attention. The floorperson has to come over and see the buy-in, confirm the chips going out, and then sees you making repeated max bet after max bet while being crushed. That is a red alert situation for the casino -- ploppies rarely do that. But when you're just winning, you're not buying in -- the pit is often unaware of the pounding that they are taking if you are sure to keep your bet below table max and the dealer isn't screaming “checks play.” When winning, the pit sometimes won't know what happened until the dealer yells out, "Coloring up $13,000.”

In short, it pays to let the house book many small to moderate-sized wins against you. End your session, let them have the win and enter it into their computer. You can always come back in an hour and try again. On the flip side, I think it's better to just crush the casino all in one shot if you can and not have to worry about ever going back there again. Short of that, getting a decent-sized win after a few big bet cycles is fine if you can get out without much attention to your play. Better to base your session lengths on the number of bet cycles (or obvious heat) than a stop win. If you get ferocious heat on a rated name and feel like that name is toast, you can just toss that player card in the trash and start over the next time you visit -- or just avoid that casino in the future or play anonymously from then on.

Thinking you are doing yourself a favor booking many small wins is incorrect. It looks really unusual on their computer if you never seem to lose. The best computer profile is a player who seems to show mostly losing sessions. Show that in their system and they're far more likely to write off any big wins you may have as just pure luck.

If you play shoes, you sometimes really can't control the magnitude of your wins. If your top bet is 2 x $500, for example, you could easily have a win in the $5000 to $10,000 range in a single big shoe. It’s better to just think of your sessions in terms of limiting your exposure based on either time or max bet cycles rather than a stop win or loss. With shoes, unless you plan to quit in the middle of a big positive count, you really have no way to control your win magnitude, other than ratholing, but you really can only rathole a few hundred dollars per session.

Ryemo: Every situation is different. There’s some great advice above, but here's my take: I usually stop if my buy-in is on the verge of triggering a CTR, especially if you want to remain anonymous. I push through the losses; but in the last month or two, I've experienced some huge swings for my betting level and, wanting to remain anonymous, have had to cut myself off when I'm close to the CTR point. Other than that, I keep pushing through, while keeping the heat factor in mind.

It feels bad when you see a good portion of your bankroll get raked away in a short amount of time, but I've also seen the positive side of this and have managed to make some unbelievable session comebacks. So I just keep pushing through, unless I feel like a backoff is on its way. If I’m in the middle of a trip and am in danger of losing my trip roll, I would keep playing, but slightly adjust my stakes to somewhat reduce the chance of busting out that trip.

Another thing to consider is how you handle the loss emotionally. If you feel like you aren't playing optimally anymore due to taking a severe loss, then take a break and come back after you cool down. Otherwise, if you aren't on the verge of a backoff, you aren't in danger of busting your trip roll, and you can continue to play optimally, keep grinding and you'll eventually make it all back. I've seen enough huge positive upswings/comebacks that I know no matter how bad the loss may seem, you'll get it back. Sometimes sooner than you think.

I recently had a trip where I was down $13K at the beginning of my trip but I fought back into positive territory during the remainder of my trip. Then two hours before my flight, I dropped $8K and finished the trip down $7K. More recently, I had a session where I was down $6.5K in two hrs -- one hour later, I made all $6.5K back and finished the session with a $7K win. The swings are brutal but often are good; that's all I can say. Keep grinding and don't get gun shy after taking a big hit; you should be fine.

The Stereotypical Card Counter
December 2, 2019 1:09 am
CTR's and SAR's this day of age forces black chip betters and higher this day of age to report gambling winnings on taxes. At the green chip level, you might be able to avoid SAR's by simply limiting your chip total to significantly lower than $10k (example $5k), but be careful. When buying in you have more flexibility to get closer to 10k during losing streaks. Of course, if you're playing less than $25 minimum your odds of getting an SAR is extremely unlikely.