Surveillance report of a backoff 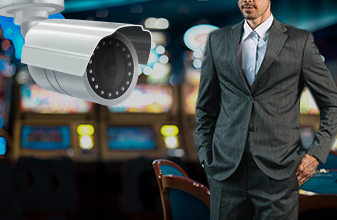 I thought I would share the surveillance report from one of my backoffs from a large casino in a major jurisdiction. Of course, I am changing much of the information for obvious reasons:

On (date), Surveillance observed guest (name) with a large amount of chips in front of them (Unknown why plural was used, I was the only one playing). Surveillance immediately began a player evaluation with the following results:

Guest was in $xxxx with a bet spread of Y to 8Y (That was incorrect, I actually spread 1 to 6, so going 1 to 6 or 1 to 8 may not be much different unless you do some strategic betting). Guest appeared to be moving their wagers with the count. Guest wagered Y & 2Y on negative and even counts, and as high as 8Y on a +4 with 4 aces out. Guest had good basic strategy (no deviations observed) (No mention of correct count-based deviations). No progression play observed, also no insurance or surrender observed.

Told casino shift manager who approached the guest and backed them (incorrect plural again) off from any further blackjack play. Guest departed the pit and cashed out.

Guest is losing $xxxx for the year. (It was a high four-figure amount, so I thought I was in “good shape”.)

There is nothing further to report.

Handymn: Good grief, they didn't even watch you long enough to see a surrender play or insurance decision? What a weak evaluation. They have to just be guessing half the time at this place. Apparently, the shift manager took the eye's shaky evaluation for gospel, clearly ignored the losses by NOT telling them to watch you further, and then kicked out a customer they were winning against. I would imagine they guess wrong and drive business away quite often.

21forme: How did you get this report?

Youk: There are inside sources that have been cultivated over the years, though I obviously did not get enough information in time to avoid the backoff.

Rockky176: Interesting report. The last place I was backed off from had me losing 40K for the prior year and 65K lifetime. Their calculation was way off, but like you, I thought I was golden. It goes to show that ratholing is probably overrated. Your situation confirms that it is not a good idea to have lots of chips on the table. My guess that the place is not a smart shop, based on them starting the evaluation so lightly and doing it so quickly.

Chairman: I think losing is good cover for individual sessions -- the pit is definitely not going to sweat a loser as much as a big winner. But I think cumulative loss is overrated. In the five casinos in which I’ve lost the most, I’ve been backed off from three of them. In the five casinos in which I’ve won the most, I haven’t been counter-measured at any. Go figure.

Anonymous: Setting aside the skill of a casino employee in being able to detect an advantage player, which is often quite poor, most of the people in a casino are losers so it's highly likely most of those backed off are losers and are probably big players. Casino counter catchers cost casinos a lot of money because they have to catch and throw out someone to justify their own existence. This leads to bad players being caught in the net.

A casino employee may just decide to not give a big player a chance to get his money back -- they think they have him beat. If a player is winning, they want them to play until the casino gets its money back.

If you are playing longer during losing sessions, it does give them more time to evaluate, especially if you get more aggressive.

I was playing one time and was getting low on cash; one pitbull said to the other, “We nearly have him beat.” Maybe I should have complained to management about the comment, but I thought better of it.

bigplayer: When you lose big initially, it can buy you time. But if you make a significant comeback, the casino will begin to guess that maybe you read a book and learned to play and may back you off before you get your money back. Likewise, it's human nature to play more aggressively when losing and we often nail ourselves that way. When you are losing big,

rather than come all the way back, quit when part of the way back and let the casino book a win against you.

Ikipiros: I think the most important part of this report is what triggered the player evaluation. According to this, the large amount of chips in front of the player was the trigger.

The Chaperone: I always pocket chips. And I'm not talking about ratholing. I'm talking about blatantly putting chips in my pocket. This serves a few purposes:

a) It deters toke hustling from dealers. Most places have some type of dealer rotation. Whether you are winning or losing, as an AP who spreads bets a lot, you will likely have a lot of chips relative to the amount being bet (especially if playing long sessions) and new dealers will assume you are up big. By putting chips in your pocket, you look like a loser on a short stack, at least until you lose some and pull out more chips, and even then they have no idea how much you have on you.

b) Same as above, but even works sometimes with a new pit boss or shift. This shouldn't be the case, but some of these places are totally clueless. From the above report, it looks like it might even deter unwanted attention from surveillance.

There's really no advantage to having a bunch of chips in front of you unless you are on the Las Vegas Strip and wish to be approached by prostitutes, which is probably a bad idea when carrying a bunch of cash/chips anyway.

Harvey_Ledbetter
February 14, 2020 4:50 am
Plural was used because it is gender neutral, would be my guess.