Pit Boss of the Year 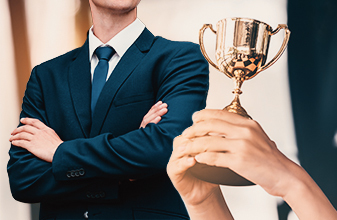 The Pilot: The Pit Boss of the Year award goes to...

I recently had an opportunity to play single deck for a couple of days. It was early in a blackjack trip and I knew that I would be visiting this same store several times during my stay. I was trying to not draw attention to myself by being overly aggressive.

The pit boss came over to my table and started a light chat with me. At the start of the next deck, a bunch of little cards came right off the top and the boss instantly noticed what I saw. He took a couple of steps back and stared at the deck and my betting circle, so I decided to flat bet because of his level of interest.

The count went very positive, and had I not chosen to flat bet, it would have been max bets as quickly as I could. As it turned out, I whiffed on every hand -- I lost them all! Final True Count was +22!

I built great credibility with this boss as being an ignorant ploppy, and was able to play his pit unmolested the rest of my stay. Timing is everything -- the boss wasn’t initially giving me any heat -- though perhaps some sweat -- but he was sure interested to see how I played with a huge count.

As a side benefit, I side-stepped losing a bunch of money, though of course I lost EV by flat betting. But as I left the store, I had to laugh to myself about how much money the boss cost the casino just by doing his job.

Comments by Lonesome Gambler: This is an issue that I think many players need to consider a little more in-depth. The Pilot explained his reasoning, and it's not my place to speculate whether or not his play was what I would consider to be justifiable -- that's a matter of personal preference. Backoffs can come quickly in single-deck games, which is a valid point. I would ask then, is the ability to play longer than 15 minutes valuable in a game where 15-minute backoffs are common? Will the casino tolerate a tiny player edge but not a bigger one? Does the boss know how to count? Will surveillance be fooled by the rounds that the pit boss didn't watch?

In other words, say you play a monster deck by flat betting the table minimum. How much money did you lose in EV? Surely you could make that EV up easily if you were allowed to play another few hours on that shift, but if they allow you to play a +EV game for that long, then what kind of cover is your flat-betting ploy buying you in the first place?

I think the whole concept of temporarily throwing away your edge in exchange for the possibility of being able to play longer is generally a misguided approach. With certain exceptions, I think that playing cover is a ridiculous waste of money -- pit personnel often can't count, and if surveillance runs a skills check, you're toast anyway. Betting cover will buy you time, but it can eliminate your edge. You'll look like a civilian because you'll have become one, by your own choice.

Furthermore, I think that there's a fundamental problem with the way players treat cover plays. It's easy to attribute longevity to their usage, just as it's easy to justify over-tipping by reasoning that it may have bought you better conditions. But the reality is that a vast majority of what you do in a casino goes over the heads of anyone who cares to watch. Many things that appear glaringly obvious to us are beyond even the finer points of what the game-protection staff is looking for.

I'm sure you remember the first time you pushed out a max bet, thinking, they're sure to get me now, and then the relief when nothing happened. We think that nothing goes unnoticed, but the opposite is often true.

The following was my philosophy early on, and I feel like it played a substantial role in my early success as a card counter: I wasn't afraid to use a bet spread of 1-60 in low-limit games, then get out before trouble came. I spread 1-20 for an hour in a double-deck game at a notoriously sweaty downtown Las Vegas property while having a chat with the boss about local dining. I never once used playing or betting cover; my cover was short sessions, a pleasant affect, and plain ol' paying attention to my surroundings.

I'm not necessarily advocating a no-holds-barred approach, although it’s legitimate and probably optimal for some folks, but I think that players should think twice before they throw money out of the window in exchange for nothing more than what I consider to be a fundamentally -EV gamble ($100 says the pit boss doesn't understand the significance of doubling A8 v 5 in the first place, and won't be able to make you based on that play alone).

There will be no one to prove you wrong if you do throw away your edge, and it will be easy to rationalize it based on the myriad praises of cover plays in the literature and within the advantage player community. But if you want to make money in this game, you need to look at everything you do with a strongly critical eye, and you must be able to recognize when you're wasting potential. Cover plays are not worthless, but they are situation-specific; more often than not, players at moderate stakes or less are in a situation where cover defeats the very purpose of playing.

Mjwbigred
December 5, 2019 11:03 pm
I have been playing in casinos for over 40 years and only been backed off once. The one time I wasn't counting but rather waiting for a shuttle to take me to the racetrack just killing time. I agree with pilot. I have seen players barred from playing on a $3 table. You need to be able to play in order to make money. I play for 12 to 16 hours a day and appear to be the average gambler. The majority of the time surveillance doesn't watch the tables unless they receive a call from the pit or are doing quarterly evaluations of the dealers. EV is important , but what is the EV of a dealer who has a habit of miscounting when you have two hands at max wagers each time you have a green or black chip as a toke bet? I have beaten numerous 19 and 20's with seven card totals of 17. As long as the dealer is fluid everything is fine. Also if the phone in your pit or any of the nearby pits ring, you know surveillance is not watching. They watch only when notified by the pit. And when after a floor has been watching you play and you take advantage of the EV which pilot did not, you will notice the floor absent and can guaranty surveillance has been notified and you will be tapped and trespassed shortly. Like Jim Cramer would say; Bulls make money, Bears make money, but pigs get slaughtered. Ask F.S. about the best blackjack player ever. What good is having game if you can't get a game. But lonesome is partially correct as well. You need to be alert for any opportunity. I went to the Queens a few years back and played the stupid tourist bit and asked why when I played at the table over there (a single deck game) no one could join me , but on this game (a six deck shoe) people could. That was when the nice pit boss tried to explain card counting to me and wonging. I then said well why can people join me in this game? And without thinking he said that card counting a single deck is easy, but for 6 or more decks its near impossible, so we don't even watch the shoe games. I then thanked him and stuck to that casino on his shift for the next month. Gotta love the kindness to tourists. However , the games there have deteriorated from what they were back then. I wonder why?

ababy23
November 19, 2020 2:30 pm
I'm sorry for posting but I'm wondering if you Mjwbigred managed to answer this question because I have the same questions, what can you say?

tanamonn
June 15, 2021 1:28 pm
thats really interesting. I used to play poker 24/7 back in the day, but after 3 years of constant playing I got bored. I just didn’t feel any disappointed when I lost nor I felt any ecstasy when I won. The process just died out for me at this point. And that’s when I decided to quit gambling. I didn’t play for a year and I wasn’t really happy about it, as if a part of me just died. Gladly, one day I saw my fiend doing random bets. I noticed that he won 50$ and he was really happy about it. At that moment I was a bit interested in it and decided to ask him about the process and how it works. We talked about it the whole day and he made me want to try it out. I asked where I can bet using crypto (since all of my money is in Ethereum) and he sent me this <a href=«https://sportsbetter.io/eth-sports-betting/»target="_blank">https://sportsbetter.io/eth-sports-betting/</a> website for that. On the next day, I started Ethereum sports betting, and at first, I lost a lot, but with practice, I managed to win more and more.