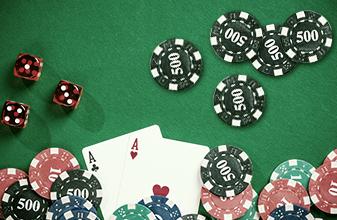 I play mostly green chips to black chips. I recently ground through a tough trip to Las Vegas. I know it’s normal and not that big of a deal, but after reviewing my play I came up with something that I thought might be biting me in the butt!

Do you ever bet more or less than what you’re "supposed" to with regard to the count?

Ever since I got backed off my first time, my game has been more paranoid. I was backed off because surveillance was counting along with me and I had no hints with regards to angry pit bosses or phones ringing or anything like that. So now, about once per shuffle, I will over/under bet by one or two units depending on what I feel a ploppy would do based on his last win or loss. Obviously, I will lose EV with this approach, but don't you think the cost is small relative to the longevity it will hopefully provide? Or am I better off just playing correctly until I get backed off?

Young Gun: If you're playing stakes that can blend in with the crowd, you don't really need to use this type of cover, but if you're not, betting cover can be essential to longevity. Little moves here and there can you buy a lot of extra playing time, and they cost you very little EV if used wisely. The real downside is your variance can skyrocket if you're betting big when you only hold a tiny edge, but again playing high stakes this is essential to longevity. Remember the best cover of all is short sessions if that is feasible.

bigplayer: It's costing you some money and making it more likely that you will experience unexpected swings (i.e, you're not going to get into the long run as fast as you otherwise would expect).

Just put out the money. What's going to happen by cheating on your proper bets is that you're going to get backed off anyway and you're not going to pull out what you should from the casino. Also, you're never going to find out how far you can push certain casinos unless you push them reasonably. Some casinos will not take any kind of bet movement, some are incredibly tolerant and you'll never find them if you play too conservatively.

The best cover remains to play many shorter sessions rather than single long sessions.

Skittish: Thanks for the advice, I really appreciate it. But please define “short session.” Does that mean thirty minutes? An hour? If I sit down with $500, am I happy to leave after thirty minutes with a $300 profit? If I'm losing can I stick around longer?

Young Gun: In a big action casino, I say an hour. If it's a smaller casino or one with few green chip players, than thirty minutes or less. But it's not really a set amount of time. If all of your first three shoes go positive and don't drop, thus you have multiple-unit bets out most of the time, there's no need to leave. Also, if all of the shoes are negative and you wong out once or twice, there's no reason to leave since they haven't yet watched you unless your action will really turn heads when the shoe goes positive. So basically, if you have a bunch of maximum-bet cycles in the first half hour, leave, and if your bets are fairly uniform and you aren't drawing attention to yourself, stay an extra 15-30 minutes, or until a shoe goes negative and you want to wong out.

A $300 profit is nothing anywhere on the Las Vegas Strip. I certainly wouldn't leave just because I was up a couple of max bets, but yes I am more inclined to stick around if I'm losing. Sometimes I will lose a bunch of max bets in a row and the pit boss will walk away just to get rid of the awkwardness created by me losing so much money. I'm certainly not going to leave when this happens. You can and will eventually get backed off while losing, but it happens less frequently than when you are winning.

EmeraldCityBJ: BJ21’s glossary defines a short session as leaving the casino after spreading beyond what you think the casino will tolerate, immediately at the end of the deck/shoe or as soon as the count is no longer positive; or leaving after thirty minutes of play -- whichever comes first. This is a good definition. In some cases, this means playing for less than five minutes if the first shoe/deck you play happens to involve a high count. In other cases, you'll end up with mostly neutral counts and end up playing a half hour.

Note that this is a guideline. There are places where you might be able to camp out all day without incident. There are other places where anything more than fifteen minutes is too long. If you've been flyered, it's a matter of how long it takes someone to recognize you and for them to go through whatever procedures they follow for a backoff/trespass. To understand tolerance levels and backoff procedures for each given casino, your best bet is to network and talk to local AP’s through private email.

Richie Lakin: I leave after "showing my spread." Win or lose has little or nothing to do with it. I also agree with thirty minutes. Nobody has ever been kicked out for leaving too early. Never overstay in an attempt to recover a losing session. Book the loser, and move on.

One Big Shoe: Time is not necessarily the essential element for a short session. For example, you might sit down at a table and have a series of flat shoes where the count never gets high enough to justify putting out your max bets. This could go on for a while. Then, you get that one big shoe where you have a high count and you start putting out big bets. You should consider leaving after that shoe is over, win or lose. If the shoe comes early, then you've played a short session in terms of time. If it comes later, you've played a longer session in terms of time, but a short session where you've exposed yourself in terms of big bets. If you stay after the big shoe, you're faced with the problem of reducing your bet after having made a series of big bets. None of us like to leave the table as a loser, but you don't have to win it back in that particular casino. There is always the one next door or down the street.

This is assuming you are playing in a venue where you can easily go to another casino. It's a little different when you're playing in a place that doesn't have another casino nearby and it took you some time to get there. Then you have to consider getting in enough play to justify the time and expense it took to get to the casino.

104319104319
September 18, 2019 5:05 pm
I usually play short sessions 45 min-1 hour. I play black chip and recently I have been flat betted in two casinos. I think know matter what if you are making a profit they will notice you.
I stayed totally under the radar and by coincidence there was a casino I never lost in(I played probably 6-10 times in a year) I never won more than 2G in one sitting and followed all advice of not staying past a big bet streak anyway they upgraded my players card and must have realized this I walked into the casino I don't think I played three hands when a gentlemen in a suit asked me to step away from the table when I did he told me that he was flat betting me on the Blackjack tables I am welcome to stay as long as I did not vary my bet or I can play any other game in his casino