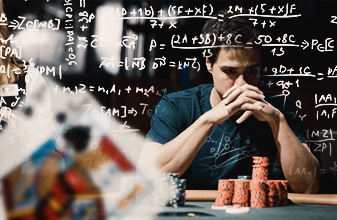 Does card-counter etiquette exist? I thought it did until I saw a small team of foreign-based players blatantly blasting away at my favorite local game. I had been playing at this little casino for six or seven years without any backoffs, but these guys decided to stroll in and play without any cover whatsoever. They showed total disregard for the longevity of the game for other advantage players.

It made me furious to watch what I considered to be a great, untouched cash cow evolve into a pit full of casino employees in a full state of panic as they tried to decipher what was happening. It was ridiculously-large bet spreads, sitting out of negative-count hands, and wonging as they awaited their inevitable back off. Surprisingly, they lasted until their third day. However, the casino has now become more educated, proactive, and suspicious. Thanks for that. It's been a while since this event, but the game has slowly diminished. Is this how I should play at other stores?

Chairman: Boo hoo. You ask, “Is this how I should play at other stores?” If you’re trying to make money, I'd say YES.

Chiquinho: The team had apparently traveled a long way. You can't expect them to sacrifice EV by not hammering a game they'll probably never play again, for the sake of another AP's longevity.

bigplayer: Your competition isn't just the casino -- you need to recognize and accept that other players are also your competition.

A player shared information with a friend about a great double-deck game he had been milking over several years. The recipient of the info went in and during just three days, crushed the casino for $130,000+ by spreading table minimum to table maximum on a good rules double-deck game with excellent penetration, at a casino that had never previously backed off anyone for being skilled. The casino then barred him, many others, and changed the game to lousy rules and lousy penetration, making it unplayable. The original player, who had been milking the game for a few years, had won only about $50,000 during that whole time. But he was angry that he lost what he considered his "private game." The second player basically told him that if he didn't want to risk having the game destroyed, he should have kept it to himself.

Milking a game is rarely the optimal solution to maximizing your EV. There is some mix of art and science at figuring out the best approach, but you will generally make more money by being the person who crushes a game. If you spread big at a small, innocent casino with a great game and lose, chances are they'll love you even more and give you plenty of chances to get your money back. If you win, you'll win more than you would have made otherwise, and can move onto other things. Money now is worth more than that same amount of money two or three years from now.