Will casinos ever “resort” to good blackjack rules to be competitive? 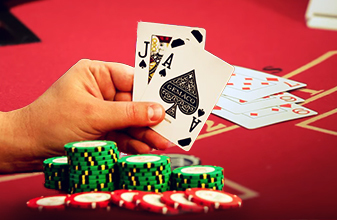 Are there any examples of casinos improving blackjack or other game rules, or lowering poker rakes or food prices to attract customers? I have heard of single-zero roulette in some places for example, but how many people will that bring in from two or three states away? I sometimes wonder if building bigger resorts with so-called “resort fees” are the only things they can think of to attract more customers. Of course, resort fees are also used to deceive search engines into thinking the room prices are lower than they really are.

Captain Jack: Back in the day when the Las Vegas Review-Journal used to actively promote its Best of Las Vegas, some downtown casinos would offer ridiculously good blackjack games to garner votes. Blackjack is already a lousy game for casinos to offer when you think in terms of profit per square foot. There's not much incentive for casinos to want to offer a version of it which might lower the profit per square foot.

21forme: CJ, you're missing the peripheral gain to attracting table-games players. While Mr. Gambler is playing blackjack, Mrs. Gambler is throwing money away at the slots. Many businesses (eg., supermarkets) have found loss leaders are a good strategy.

Ikthor: I await the future when some brave casino/chain just decides to yank blackjack out completely and fill that space with carnival games or slots. Only the fear of irate customers keeps them from doing it, but I suspect that casino hold and profits would actually go up (perhaps after some initial shock and people going elsewhere). Like parking fees, resort fees, and even 6:5, once implemented if the result isn't Doom, then others will follow suit.

Captain Jack: Casinos use plenty of loss leaders already --- freeplay, free booze, entertainment. Good blackjack is probably not an efficient loss leader. It doesn't have a fixed cost and it also comes with an opportunity cost. That table, that dealer, and that pit person could be used to deal a different game that the uneducated public would be more than willing to play.

If I ran a casino and wanted to hype good blackjack as a marketing gimmick, I'd devote no more than one table to it or I'd find a way to make it space-efficient. Perhaps Stadium Blackjack or other blackjack machines could be it.

bigplayer: I basically agree with Captain Jack. Casinos cannot offer rules and games ridiculously better than their market is offering, without accepting the consequences. If everyone offered great games, unprofitable players would be spread out all over town. If any single casino in a market offered great games, all advantage players would focus on that single casino. Pennsylvania has proven that dealing low-edge, good-rules blackjack can be exceedingly profitable. The Las Vegas Strip has proven that dealing high-edge, bad-rules blackjack can be no more profitable than dealing standard-rules blackjack. Las Vegas blackjack hold has steadily gone down over the last 25 years, despite the rules getting worse and worse for the player. The key to increasing casino profit is to increase the drop -- offering great rules (reducing the hold) does not always result in more business on its own -- and the first responders to great rules are usually not good customers.

In short, the answer is complex and every market and every casino has its own unique competitive position from which to attack, or that it has to defend. Simply offering the best rules is not going to be a panacea for everything that is wrong with an under-performing property. If the hotel is lousy or the restaurants are lousy or the pit sweats the money or whatever, then good rules, loose slots, and loose comps become irrelevant except to players who the casino probably doesn't want as customers anyway.

That said, as a total package of things to make a casino more fun and attractive to customers, offering a mix of games for all types of customers, including some $10 and $25 3:2 decent six-deck and double-deck games would likely be part of the picture. But if it was my casino on the Las Vegas Strip, I'd be mostly offering machine-shuffled eight-deck shoes with one-deck cuts and mediocre rules. I would probably have a few 6:5 single-deck games but would toss out all of the continuous shuffling machines.

I have a friend who is friends with a Table Games Manager at Station Casinos, which caters primarily to the Las Vegas locals market.. He asked why Station suddenly reversed course and began making rules worse after previously adding surrender and advertising the 3:2 payoffs. The Table Games Manager said that after research, they discovered that most of their customers simply did not care about rules and had proven through research that they would play almost anything they were presented with, no matter how bad the rules were. Based on this, why would any casino offer only good rules if most customers today just don't care? Add to that, games with bad rules are somewhat self-protecting from AP's. Surveillance can spend more time watching for internal theft and other things that produce larger-scale, property-wide losses.