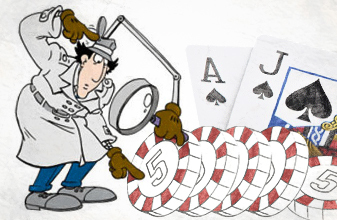 Question: Can anyone please suggest some books (other than Beyond Counting and Exhibit CAA) that would be worthwhile to read to help get in the right mentality of discovering other Advantage Play ("AP") methods aside from card counting? I'm assuming the book will probably have some decent math material, which is fine.

I'm dubious about the question because, to be honest, giving you a complete answer would be like advising you how to develop an advanced form of schizophrenia or similar mental illness. That said, it is rare someone asks such an interesting question on this forum so I'll try to provide you with enough information to proceed-but DO bear in mind the warnings.

The simple and straightforward response would be to simply say there is no answer. You either have an obsessive desire to find obscure and original plays or you don't. You don't, or you wouldn't be asking.

To give you an example, when I was 19 I spent close to a thousand hours trying to beat that stupid game with plastic horses where you bet a dollar or whatever in a coin-op slot. No, I wasn't joking about the schizophrenia. At the end of the thousand hours I discovered that high-value coin denominations freaked the machine out and it started paying far too much. I made about $500, much less than the cost of trying various strategies out much less the value of my labour time. If that doesn't sound like a good use of time, then go and play with the squares and forget the rest of this post, and congratulate yourself on not being weird. The books bigplayer recommends will give you a nice grounding in advantage play, and if you follow the advice, bearing in mind much of it is outdated, and grind away, you'll be in a position to retire comfortably in ten to twenty years. That's all most people want.

Developing new plays is not always, or even often, the best way to make money. The most successful AP's don't have the time to commit fully to the process of discovery. They have to develop more mundane skills such as social networking, detailed knowledge of financial instruments and movement, interpersonal psychology and so on. True pioneers often make spectacular profits when they discover something, but for various reasons they rarely hold onto the cash.

As for literature, forget it. Do you honestly think there is a viable market for that kind of stuff? The sophistication necessary to come up with new plays which others are not aware of is a multi-disciplinary skill you can't write a textbook on. That's not how you sell books. Gambling books mostly sell by offering a relatively simple technique to make money, hype it up, sneer at other people offering similar systems, then fill it out with fluff. The last thing you want to do is challenge people's preconceived notions.

Reading AP literature is not enough to develop original plays. Almost by definition, any idea you got from an AP book is going to be had a hundred other math undergraduates who are trying to avoid being accountants. It can actually be positively dangerous for the true pioneer, because it makes you think like other people, and other people are probably going to develop those plays before you and burn out your opportunities before you've established you have a verifiable edge. For this reason, you have to read a lot of other stuff not to be affected by groupthink.

I tried to come up with a list of stuff that would at least be tangentially useful, but it read like a disordered sequence of esoteric tomes that would come across as perversely random. Plato was on there, so was the Hacker's Handbook. Two that probably are worth mentioning Polya's How to Solve It and Jacques Black's The Money-Spinners. The latter is an antidote to much of the American literature which ignores the historical origins and fundamentals of AP.

Here's how most people approach the search for new gambling opportunities:

2) Work out the effects of removal.

3) Determine the edge from card counting with plausible penetration and conditions.

4) Determine the edge from a loader or next-card information.

The difficulty with all that is everybody else is doing it. In some cases, the casinos themselves hire people who used to work on our side of the tables and can do all that stuff faster and more accurately than you can. If a game does appear on the casino floor with a valid edge, you now have a food fight with a bunch of other AP's which casinos rarely tolerate for long.

Here are some things AP's tend not to think about:

2) Effects of removal and variance.

3) Virtually any permutation of individually unimpressive advantages that are collectively significant. For example, say you think there's not much in this dice control nonsense, or roulette prediction/clocking, or baccarat counting etc etc. But, you do think the house edge can be meaningfully reduced. Then, if there's some systematic and exploitable promotion which shaves the house edge to a minimum in those games you have a symbiosis between the two things which can yield enormous profits.

4) Games with usurous house edges traditionally thought of as "sucker games". This generation of AP's is supposed to be aware of this but in practice they do little more than pay lip-service to the notion. There's still an excessive focus on card games in the majority of AP literature.

6) Anything people say "avoid" or can't be beaten. That's the green light for me. If I hear people saying that, I know that I have an awful lot of time to make money at a game before the recreational AP's trying to pay for a holiday to Tuscany crash the game.

8) Methods analogous to hacking or anything to do with technology. Bricks and mortar AP's are just horribly, horribly luddite. Using most conventional metrics (ROI, % edge, even absolute returns at the highest level increasingly) online AP's tend to make more money these days, and many of those techniques have B&M applications if you are confined to the limited offerings available stateside.

The optimum approach could be crudely summarized as: look at things AP's are not looking at, then apply an AP mindset to the process of actual forensic edge analysis.