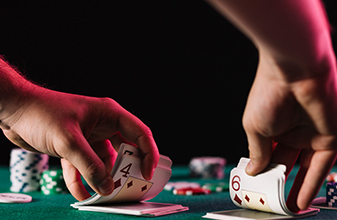 I was once taken to the backroom of a tribal casino in the state of Washington. I was aggressively playing in a six-deck game that offered a $300 max on an exploitable side bet. I would play $5/10 a hand without the side bet, and then jump up to $300/300 when the count would warrant it. I didn’t hit the biggest prize on the side bet, but I did hit several big prizes

Eventually, casino security showed up around the table (five or six guards along with three suits). It was a nerve-wracking experience. I was not allowed to leave the casino though I tried to. The circle of guards created a human wall I could not get through without physical contact, which I didn't want. After me asking to leave for five minutes, I agreed to cash out and then talk to the casino manager as long as everything was being videotaped. I asked them to call the police if I had done anything wrong and they said they would call the tribal police to protect my rights. I was not happy about that, obviously not trusting the tribal police to be impartial.

I was taken to a backroom and asked to empty my pockets. They thought I had some type of device for cheating. The tribal police looked at my phone (it had been locked in my pocket the whole time I had been playing). I took out around $8500 in cash, my keys, and some change. The tribal police did a pat down and asked for my ID, which I refused. I was told non-tribal members are required by “their law” to have ID. I then provided it as I was in fear as to what they might do if I continued to refuse.

At no point was I ever physically touched other than the pat down. After I gave up my ID, I was read a trespass act and had to sign it to leave in order to not be arrested. I was told I could not set foot on their entire property ever again or be arrested. I was allowed to cash out $1500 in chips and leave with an escort. The police followed my car all the way to the exit.

If I was in Las Vegas or outside of tribal territory, I would not have been nervous. I have been backed off quite a few times and it is usually just a few words and I leave. But I was very nervous in this context. I talked to a local attorney later and he said, “You have some rights but all lawsuits would have to go before a tribal court.” I never pursued it, as I can't see how I would have prevailed, and I would have had to pay an attorney. I was detained illegally, but it was only for about fifteen minutes. They had already called the police to be there so I didn't have to wait too long to leave. I made no loud comments, took no aggressive actions, and did not make any unnecessary comments.

I hope to never have to go through that again. But the attorney told me the same thing could happen and I would have little likelihood of getting any damages from them. I still play at Indian casinos but I am aware of what can, and does, happen.