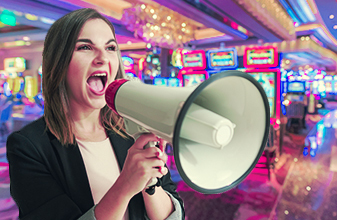 There has long been a discussion of publishing a casino blacklist providing advantage players with a list of locations to avoid. One suggestion that came out of this discussion was to launch a negative public relations campaign against a casino, in an effort to cause it to lose business from its “good customers.” Has anyone ever tried this, and has it been proven to work?

While I'd love more than anything to see a negative PR blitz waged against a deserving casino, I'm skeptical that it would have a noticeable impact, especially if it's an Indian casino in the middle of nowhere where their nearest competitor is 100+ miles away.

People who gamble regularly are likely to choose their favorite place to play based more on word of mouth and personal experiences. I would argue they are less likely to be influenced by what they see or hear in the media. Fortunately, many places that mistreat AP’s also tend to mistreat their good customers, leading to their own demise.

The person who gambles occasionally (perhaps 2-3 times a year) typically doesn't research where they play. These are the same idiots who will play the 6:5 table right next to the 3:2 table or the double-zero roulette table next to the single-zero table. A billboard may have an impact, but even then, if there isn't any competition, they probably aren't going to decide to just not play. Even if there is nearby competition, the billboard could backfire, since people might figure it was just a dirty trick by the target casino's competitor.

Has anyone ever tried a large scale negative PR campaign against a casino, not including general anti-casino campaigns launched when someone tries to build a new casino in a location where it's unwanted by locals? If so, what were the results?

Al Mucous: There was a midwestern casino that was known for creating chip-cashing problems for non-drunken/non-incompetent players. A group of players ended up buying a billboard advertising the fact that winning players could not be assured they'd be able to cash out at the casino. The story goes, they were cashed out as a result and down came the ad.

Otherwise, I expect the problematic casinos with low-value games to suffer consequences mainly over the long term as horrific game quality and generally tense environments chase business away. Casinos actually need card counters and they're fools if they don't see why. As for casinos notorious for aggressive database participation, each of us must deal with those places in a manner satisfactory to his own conscience. One bad turn certainly deserves another. At least until we're able to orchestrate the overdue lawsuit that brings down (yet another) database and in this case its participants and the executives responsible for the unlawful dissemination of personal information.

Casino Zerg: I can't imagine a negative PR campaign would have much of an impact. I don't think a billboard would harm most casinos. At my local casino, all anyone ever talks about is how terrible it is. The slot players complain about how tight the slots are and how you can never win. The poker players complain about the lack of shuffle machines and working televisions. Everyone complains about the rewards club and silly redemption procedures. Everyone agrees that the place is just terrible, but they still patronize it. In fact, I think if someone put up a billboard explaining how terrible the place is, people would just laugh when they see it and think "I can relate to that!" as they enter the casino.

A big issue for advantage players is showing ID. Most people think, "Why don't you want to show your ID?" or a more sympathetic person might think, "Wow, the casino is really stupid. They should just give you your money, but I guess you just need to show ID." Only advantage players really care about showing ID, with few exceptions. This is not an issue the general public is concerned about. If enough people actually were denied their winnings for other stupid reasons, there might be a noticeable public response.

It probably wouldn't be effective unless the offense involved racism or sexual abuse or something similar which already has a powerful lobby and creates revulsion among the general public, because the reasons that AP's have problems in casinos do not apply to the general public. In fact when I hear that an AP got the treatment someplace it just makes me wonder what he was exploiting that was so strong that they would do that and I might go after it too. But that's not something that needs to go on a billboard.