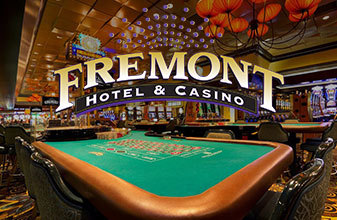 The Nevada Gaming Commission agreed to a settlement with Fremont Hotel and Casino, fining the downtown Las Vegas hotel for an alleged botched investigation that wrongfully kept a woman in security's custody for 90 minutes.

The Fremont was fined $300,000 for the alleged violations. As part of the settlement, the hotel did not admit to the allegations of misconduct.

The two women involved were playing slots near each other, according to the complaint. One of the women is seen on surveillance footage at a slot playing, cashing out and then moving. When the accused woman went to the same machine as the first patron, the accuser claimed that there was money left on the machine, about $200.

Casino security later found the accused woman on the casino floor, sitting at another machine. The Nevada Gaming Control Board claims that rather than calmly conducting the investigation, Fremont security grabbed the woman by the neck and arm from behind before placing her in handcuffs and taking her into custody, effectively committing an assault as well as false imprisonment. The complaint further alleges that Fremont security verbally berated the woman while forcibly detaining her in a backroom.

"Although there were ample avenues available to reconstruct the alleged events, Fremont personnel failed to pursue those avenues," the complaint read. The complaint stated that the investigation was "factually flawed" and incomplete. The complaint further alleged that the property didn't adequately investigate its own security footage, which the Board said would exonerate the accused woman, and that Fremont security provided responding Las Vegas Metropolitan Police department officers with false information.

"Other Fremont personnel, including surveillance and slot personnel, were also negligent in interpreting the available video and relevant slot reports that, if examined properly, would have exonerated the accused patron," the complaint reads.

The Board said the wrongly accused patron, to avoid being arrested for misdemeanor theft and taken to jail, “reluctantly and under protest” paid $202 to the female patron who made the allegation. Later, that patron was seen on surveillance footage cashing out a voucher from her pocket for $202, apparently the money she falsely claimed was taken by the victim.

The issue of the criminal offense of extortion by Fremont and its employees was evidently not addressed by the Board.

More than a week after the incident, Boyd Gaming’s director of regulatory compliance self-reported that the patron had been wrongly accused of theft and wrongfully detained by security personnel. But Fremont officials, according to the complaint, provided an incomplete report of the incident to state gaming agents. “The Board faced a general reluctance on the part of the Fremont personnel to cooperate with the investigation,” attorneys wrote in the complaint. “This reluctance included sharing information, and when Fremont personnel did share information, it was often in one word or one sentence answers detailing what happened on the evening of the incident and not shedding any light on how the decision to detain (the) patron was ultimately reached.”

A separate but related troubling issue surfaced, in that the complaint, which was filed September 16, 2020, was not posted to the Gaming Commission’s website as is normally done. It is unclear why that is so, but the Gaming Control Board has a long record of attempting to conceal its actions whenever it is able to do so. The Board did not respond to a request by BJ21 News Service for comment on this issue, and a prominent local reporter did not know why it wasn't posted.

Edited on September 29, 2020 to add:  After a formal public records request was filed by BJ21 News Service, the documents were eventually posted on the state's website at https://gaming.nv.gov/index.aspx?page=107

Nevada Gaming Commission Chairman John Moran Jr. said he thought about fining Boyd Gaming Corp. a higher amount than the $300,000 commissioners unanimously agreed to. But because “it was the first time” any Boyd Gaming property had been brought before the commission for a disciplinary hearing and the company revamped its internal arrest procedures after the incident, he opted against seeking a larger fine. Other Boyd properties have been defendants in civil lawsuits or settlements regarding other patron abuse incidents, but the Board refused to take regulatory action in those incidents, despite being urged to do so by victims’ attorneys. The Board did not respond to a request by BJ21 News Service for comment on this issue.

Deputy Attorney General Edward Magaw said the fine was designed to “send a message to the industry” that regulators would not tolerate roughing up patrons.

“The board believes this is a reasonable fine based on the totality of the circumstances and the need to send a message to the industry that such conduct on the part of a licensee’s security personnel will result in a harsh penalty,” Magaw said. “It is very important that the gaming industry have a reputation for the fair and proper treatment of its customers and we cannot revert to the old image of the industry when a casino manager who suspected someone of cheating would have security officers grab the person and haul them into a back room and threaten them with bodily harm if they did not leave the premises.

“Clearly, this is not that circumstance here and the board is not alleging that,” he said. “But it is a common theme. Here, a patron was suspected of a crime, … interrogated for 90 minutes while handcuffed to a bench, and after being screamed at and threatened, was forced to give up money that was lawfully hers.”

Long-time patron advocate Al Rogers of BJ21.com stated, ”The Board’s apparent new-found appetite for taking on such cases is encouraging to card counters and other skilled advantage players, who are often the targets of such abuse by casinos. I hope the Board will continue to be active in this area, which it has ignored for decades.”

Neither the Fremont security guards nor two women who were in a dispute that escalated into the theft accusation were identified in the complaint or the settlement stipulation.

Steve Thompson, executive vice president of Boyd, apologized for what happened and said several policy changes were made in how the company will approach similar accusations in the future. His attorney, former Gaming Control Board Chairman A.G. Burnett, told the commission the incident was an aberration. “This is not how Boyd operates,” Burnett said. “This was an unfortunate and regrettable incident and it is not reflective of the way the company or the Fremont does business in Nevada.”

Thompson said Boyd offered an undisclosed amount to the victim and she accepted it. It is unknown if the victim signed a waiver of her rights to pursue a civil action against Boyd.

First time my ass! Boyd has a history of sometimes overreacting to card counters, albeit not as brutally or frequently as Caesars.