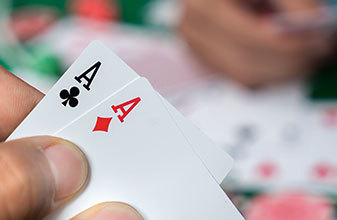 Casino games tournaments are fun, and they can be profitable too. In upcoming articles, we will be publishing a series of excerpts from Stanford Wong’s book, Casino Tournament Strategy.

The articles will explain how to win a casino tournament with less luck than the average person requires. Tournaments differ from regular casino games like blackjack, in that the contestants compete against each other for the prize money. Whether you win or lose in your bets against the casino does not matter much; what counts is whether you win more (or lose less) than the people you are competing against.

Getting an edge in a casino games tournament means correct money management — betting the right amounts at the right times.

You can get an edge at slot tournaments too, if you have fast fingers. Particularly good are slot tournaments in which you play for a set period of time with your score being the number of credits you rack up, and no cost being assigned for the number of times you push the button to win those credits. In those tournaments, the way to get an edge is to play fast. The faster you can play, the bigger your edge. Play in other than the first session of the tournament so you can watch the early birds and learn how to get the most plays in the allotted time. The machine will not make a mistake, so there is no reason to verify your payoff before playing the next hand. If your neighbor gets a big winner, do not slow down; keep your fingers moving.

Another good source of information on tournaments is www.blackjackinfo.com.

This article is the first of a series, to be continued…

Excerpted with permission from Casino Tournament Strategy by Stanford Wong.