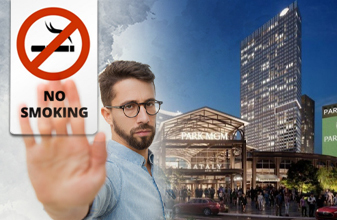 MGM Resorts announced that when Park MGM reopens at the end of the month, the hotels will comprise the first fully smoke- and vape-free -- including its casino -- on the Las Vegas Strip. Will it become the leader in encouraging more casino executives to make the decision to finally get rid of the smoke?

Park MGM has been shuttered since March when it closed because of concerns over the coronavirus pandemic. It will be the last of MGM's properties to come back. Locals have whispered for months about Park MGM becoming the Strip's first entirely smoke-free casino. When MGM Resorts and other casino companies moved to reopen some resorts, rumors surfaced that Park MGM likely would ban smoking.

Recently, the resort's website was updated with a new homepage that reads: "Let's Clear the Air: Park MGM is smoke-free."

End of an era

Local historians say the move is a big deal. Since the early days of Las Vegas, casino resorts have tolerated smoking -- especially on the gaming floor. Elsewhere around town, especially before the pandemic, visitors could find ashtrays at every gambling table.

David G. Schwartz, who has written eleven books about Vegas, said Park MGM's move is a sign of the times. "While there have been many casinos outside of Las Vegas that have been smoke-free, this is the first time a Las Vegas resort of this size is going smoke-free," said Schwartz, who also is associate vice provost for faculty affairs at the University of Nevada, Las Vegas (UNLV). "It shows how the casino gaming industry's position on smoking is evolving."

Howard Stutz, a longtime gaming industry journalist, agreed. Stutz said that while casino companies have tried smoke-free gaming on the Las Vegas Strip, they have experimented with it only on a smaller scale.

"For Park MGM... the timing now due to COVID-19 health and safety guidelines seems right," Stutz wrote in an email. "So many other gaming markets, notably Maryland, are nonsmoking." He predicted there likely will be some pushback from smokers and smokers' rights groups, but said he expects the move to stick.

Some observers, such as BJ21.com’s Al Rogers, expressed their approval of the move. Rogers said, “Among our clientele, who are mostly card counters and other advantage players, the stench of smoke and accompanying health risks are a consistent complaint about casinos, second only to patron abuse. This move by Park MGM is a pleasant change.”

2020 has been a difficult year for Las Vegas. The tourism industry shut down almost completely, with all casino resorts closing for April and May because of the pandemic.

According to statistics from the Las Vegas Convention and Visitors Authority, visitor traffic in June 2020 was 70% lower than what it was in June 2019, despite several gaming properties gradually reopening earlier that month. Numbers have climbed slowly since then; a mid-September weekend was one of the busiest since February.

Park MGM can be a healthy trendsetter on the Strip

Offering a smoke-free resort is great for Las Vegas. And if it prompts other companies to follow, it’ll be even better. There was a time when the idea of a nonsmoking casino in Las Vegas or anywhere else would have been unthinkable. The school of thought was that any local casino that went smoke-free would be committing economic suicide, because visitors would go to other places where they were free to indulge their habit.

But that’s outdated thinking. Many casinos across the country are now smoke-free and, at least until the pandemic hit, were doing quite well. Their success proves that smoking bans aren’t a deal-killer for casino visitors, any more than they’re a deal-killer for restaurants and other businesses that have gone smoke-free.

MGM Resorts deserves credit for watching this trend and responding to the patrons and staff members who want an environment free of secondhand smoke. We’ll see what happens with Park MGM, but we think the nonsmoking policy will be a success.

It certainly will be a healthy step forward for the property’s staff, which, up to now, couldn’t escape the dangers of secondhand smoke while they were at work. While most resort air circulation systems are quite good, they’re not as effective at reducing smoke as an outright ban.

Also, with respiratory issues being front and center in the age of coronavirus, MGM’s move is a statement that the company understands how difficult it is for some patrons and employees just to breathe normally without worry of contracting COVID-19.

Industry experts are predicting that other resorts will follow MGM’s lead, which makes sense when you consider the modern business model of the Strip. Gone are the days when the companies relied mainly on gambling for their revenue. Today, the resort economy runs on a diversified stream of revenue heavy on shopping, dining and entertainment in addition to gaming. Given that smoking isn’t allowed in most retail stores, restaurants and entertainment venues, it won't be a huge shock to the system of many casino visitors not to be allowed to smoke anywhere inside a resort.

It’s great for locals, too. At Park MGM, gone will be the days of coming home from a night out on the Strip and having to hang your clothes outside to air out. The stink brought home from being in smoke-filled casinos is usually the worst thing about them.

“By going smokeless, Park MGM can be a healthy trendsetter on the Strip”, lvsun.com, September 17, 2020.