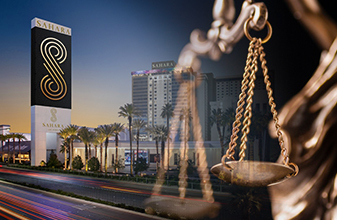 In a two-count complaint, the Nevada Gaming Control Board cited three instances of people standing too close to a slot machine, craps table and blackjack table while watching other patrons.

The board also cited a luncheon put on by an unnamed trade organization, which was attended by about 135 people, in violation of Gov. Steve Sisolak’s emergency directive limiting gatherings to a maximum of 50 people, the complaint said.

In a statement, a Sahara spokeswoman said the company “acknowledged and immediately corrected conditions related to state-mandated social distancing protocols.” She did not say whether resort officials planned to appeal the case.

The Las Vegas Strip property is owned by businessman Alex Meruelo, who is also the majority owner of a National Hockey League team, the Arizona Coyotes, and the Grand Sierra Resort in Reno.

Sisolak ordered casinos statewide closed in mid-March to help curb the spread of the virus. They were allowed to reopen starting June 4 under safety guidelines which include reduced occupancy and, later, mandatory face coverings for guests and employees.

This was the first regulatory complaint issued against a Strip property involving restrictions regarding the coronavirus outbreak. The Board previously filed three other complaints against small properties. It is rare for the Board to take public action against a large property. Most complaints against large casino companies are settled privately, which is allowed under unique Nevada laws, which generally protect casinos and the Board from public scrutiny, much to the continuing dismay of advantage players and patron abuse watchdogs.

“We take our duties as a licensed gaming operator very seriously and work continuously to adhere to the health and safety standards set forth by the governor and Nevada Gaming Commission,” unnamed Sahara officials said in the statement.

“As stated in the Nevada Gaming Control Board filing, we acknowledged and immediately corrected conditions related to state-mandated social distancing protocols inside the resort identified shortly after reopening in June. Prior to that, we worked with health experts to develop our own stringent health and sanitation protocols through our Sahara Cares program,” the statement said.

“We routinely review these protocols with team members to ensure compliance across the resort. Nothing is more important to us than the health and safety of our guests and team members and we will continue to work cooperatively with government agencies to ensure we meet these high standards.”

In other Sahara news, the casino company filed a defamation lawsuit against a local blogger who reported what the casino’s owners said was an inaccurate rumor that the property would close in September.

Scott Roeben, the man behind vitalvegas.com and the Twitter handle of the same name with more than 73,000 followers, tweeted: “Gut punch of the day: Rumor is Sahara could close permanently in September. Permanently.” The property’s lawyers allege that Roeben had made no effort to contact the company’s representatives to verify the information. The casino’s parent company, Las Vegas Resorts Holdings LLC (LVRH), received many inquiries, Sahara’s lawyers wrote in the legal complaint.

“At no point since taking ownership of the property has LVRH contemplated permanently closing the SAHARA,” attorneys wrote in the lawsuit. “The fallout from the … publication was widespread. LVRH has had to expend considerable effort assuring worried employees that the SAHARA was not closing, many of whom were already concerned about their jobs as a result of the current COVID-19 pandemic.”

In an email to the Las Vegas Review-Journal on Friday, Roeben suggested that he had not seen the lawsuit until a reporter sent him a copy.

Sahara’s Twitter account responded to the Vital Vegas tweet, which has since been deleted: “There is no merit to this claim. It is extremely disappointing to have someone spread unfounded rumors that detrimentally impact our team members, guests and community. To find out what we are really about visit https://sahara.lv/SAHARACares.”

Roeben couched his original post by writing, “This startling rumor is unconfirmed, but there’s no denying Sahara was having a rough go of it even prior to the COVID-19 crisis.”