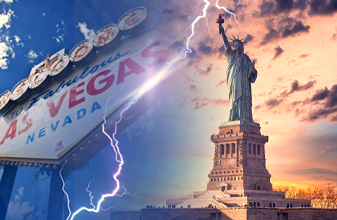 If it wasn’t for the worldwide pandemic, hundreds of thousands of visitors would again have been in Las Vegas for one of the world’s most notable New Year’s Eve celebrations. They would have packed the Strip and downtown to celebrate as the clock struck midnight to begin 2021. And, of course, there’s usually a nearly 10-minute fireworks display that lights up the Strip.

Pyrotechnics were reduced this year, and moved downtown, but officials welcomed the crowd just like they would have in non-COVID times, including closing Las Vegas Boulevard to vehicle traffic and having heavy police presence in the corridor, In a locally much-maligned display of indifference to the health and safety of visitors and locals, especially employees, many of whom stated they were forced to work against their will, the official attitude appeared to be that the casinos are the masters of local government, and the show must go on.”

Las Vegas Boulevard, from Spring Mountain Road to Mandalay Bay, went on a soft lockdown at 7:30 p.m. on December 31 and was completely shut down to traffic by 8 p.m. The area was moved this year because of the construction underway on the north Strip. The Nevada Highway Patrol shut down the Interstate 15 ramps as usual. It was as if the pandemic, which has overwhelmed local hospitals, did not exist.”

Patrols for the rest of the valley will be properly staffed, Metro Police Deputy Chief Kelly McMahill said. There is an operation that will try to disrupt house parties at mostly-illegal short-term rental properties, some which this year have turned violent, even deadly.

Asked about what worries her most, McMahill echoed other officials in mentioning the spread of COVID-19 and the hospitals again nearing capacity. “If you’re coming to visit here, if you live here, and are coming to the Strip or downtown, please be mindful,” McMahill incongruously said before the event. “We welcome you to have a good time, but we also don’t want to set ourselves back months in this pandemic, where we have more and more people going to the hospital and we’re closing down our city.”

“This year will look and will feel very different,” Clark County Commissioner Michael Naft said. “I want to personally and very directly ask the members of our community to keep our medical personnel in mind as you celebrate this year,” he said. “We’re going to throw the biggest party the world has ever seen, next year.” For this year, Naft said: “We want to support the economy, we want to make sure that everybody is able to celebrate in their own way but with your close friends and family. Keep that group small, wear your mask, wash your hands.”

The downtown Fremont Street Experience block party, a local New Year’s Eve staple, was a target of scrutiny with the state COVID-19 Mitigation and Management Task Force. Member Terry Reynolds from the Department of Business and Industry said the robust security presence was prudent, but the access wristbands that he characterized as “advance ticket sales” were irresponsible and encouraged people to attend.

State COVID Response Director Caleb Cage wrestled with how the city planned to meet the expected turnout even without the city’s endorsement. “I have a hard time with the mental gymnastics that say… that this is a ‘protest,’ this is not an ‘event.’ That there is an access fee, (but) that it is not a ticketed event,” he said. “I have a lot of trouble with this. It seems an awful lot like the city has worked very hard in order to skirt the spirit and the letter of the directives as they are written in order to protect us.” The city has already been embarrassed nationally by an ill-advised interview with CNN’s Anderson Cooper by Mayor Carolyn Goodman, who had previously made outlandish statements dismissing the seriousness of the pandemic.

Clark County Commission Chair Marilyn Kirkpatrick, meanwhile, was nervous and frustrated over the potential stress on local hospitals. She said mass New Year’s celebrations could put area hospitals past capacity, which they’re uncomfortably approaching as it is.

Across the country, the iconic New Year’s Eve ball dropped at midnight in an eerily empty Times Square in New York City and was live streamed into homes across the nation. The usually-packed New York City block was mostly empty because tourists and locals were encouraged to celebrate safely at home because of the pandemic. To honor the ongoing efforts of the medical community in battling the pandemic, there was an organized number of frontline health-care workers in attendance, properly separated into small pods. New York City ran its event efficiently and with safety the top priority.

The scene in Las Vegas was much different. Crowds of people, some not wearing masks, packed the Strip, surrounded by others. Photos of the scenes on the Strip drew criticism on Twitter, with many accusing people in Las Vegas of being irresponsible with their handling of the holiday during a pandemic and correctly calling the celebration a “superspreader” event.

Despite the crowds, some local officials seem to agree that the Las Vegas New Year’s Eve celebrations went about as well as could be expected, given the constant shameful tug-of-war between public health and the city’s tourism industry.

UNLV epidemiologist Brian Labus said it’s hard to figure out how to handle such situations in a city so heavily dependent on bringing people together. “It’s always a big challenge here in (Las) Vegas to balance tourism and public health,” Labus said. “We on the public health side of things would obviously prefer not to see people gathering, but there’s not much more anyone could have done other than close down Las Vegas completely...”

Clark County Commissioner Michael Naft said, “It’s just not realistic to tell people they can come to (Las) Vegas, but then force them to stay in their hotel rooms the whole time they’re here. So we did everything we possibly could to get the message out, requesting that people follow the governor’s guidelines, and I think the properties and law enforcement did a great job of enforcing things as best they could.” Naft overlooked the obvious, in that public health orders were largely flouted, and that many of the visitors, particularly those from California, may have been violating stay-at-home orders by even making the trek to Las Vegas. The pandemic is raging in California, even worse than in Nevada at present. The New Year’s celebrations will not help. Similar behavior was seen in California itself.

Labus said he expects to see an increase in COVID cases in the coming weeks but noted he doesn’t think it can be linked to New Year’s Eve alone. In surprising disregard of the gravity of the situation in California, he continued, “Tourists who came to (Las) Vegas wouldn’t even get sick here, they would get sick when they got home, so it ultimately wouldn’t affect our numbers here,” Labus said. “Plus, I think we’ll see an increase that can be attributed to the holiday season as a whole. Thanksgiving, Christmas and New Year’s are such big times for people to gather together in large groups, I think we’ll definitely see more cases soon.”

Dr. Fermin Leguen, acting chief health officer with the Southern Nevada Health District, cautioned that Las Vegas-area residents need to remain diligent in taking the proper COVID precautions into the new year. “We appreciate that many people chose to celebrate the holiday at home with their family,” Leguen said. “While the agencies worked well to plan for the inevitable crowds that showed up, our rising case counts and deaths are a reminder that everyone needs to continue to be vigilant and follow the recommended precautions to slow the spread of the virus.”

All said and done, there is no way to disguise that it was another thoroughly-deserved black eye for Las Vegas.