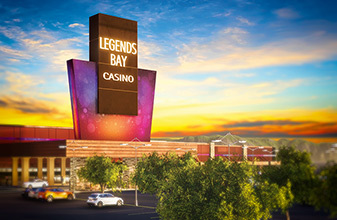 Legends Bay Casino, the first new casino in the Reno-Sparks area in well over 20 years, is scheduled to open in August at the Sparks Marina, on I-80 just east of Reno.

The Nevada Gaming Commission has approved the license requested by Olympia Gaming of Las Vegas.

Legends Bay will feature a sportsbook run by Circa Sports, as well as blackjack, other table games, slot machines, video poker and restaurants. The company said that efforts to hire 300 workers are under way, including several local hiring events. A company spokesperson said the sportsbook will be the “largest in northern Nevada.” Circa Sports' sportsbook at Circa Resort & Casino in Las Vegas is claimed to be the largest in the world.

Advantage players of all types, including card counters, will be scouting the property carefully, as they do at every new casino opening, seeking additional opportunities to ply their trade.

“Hopefully, (Legends Bay) will open in August,” said Court Cardinal, regional president of Olympia Gaming. “We have not committed to a specific date at this point because things can change at the last minute.”

Olympia Gaming acquired the property in 2006 with big plans for a new hotel-casino. Other amenities discussed at the time included a lakefront amphitheater and a baseball stadium.

But a downturn in the economy put those plans on hold during the Great Recession, and more recently the worldwide COVID-19 pandemic caused more delays in the now smaller-than-originally-planned project.

“One thing I’ll tell you is that it’s been a long time coming,” added Cardinal, who is also in charge of the Olympia-owned Casino Fandango in Carson City.

The original target for wrapping up construction? The year 2008. “We all know what happened in 2008,” Cardinal remarked.

Since then, Olympia Gaming has readjusted its plans several times, but faced a large legal hurdle. A law passed by the Nevada State Legislature in the 1990s requires new casinos in counties with a population between 100,000 to 700,000 to have at least 300 hotel rooms. Washoe County is that size.

A closed casino in downtown Victorian Square in Sparks, the Mint Casino, would ultimately hold the key to solving Legends Bay’s licensing issue. The Mint was located near the Silver Club in Sparks, which closed in 2009 during the recession.

“We found a grandfathered gaming license in Sparks that was actually movable from one location to another,” Cardinal said. “So we purchased that gaming license.”

The new casino features a Food Truck Hall where vintage food trucks will be on working display. “(Buffets) had their day back in the beginning when you needed cheap (food) to get people to play the tables and slot machines,” Cardinal said. “But they don’t really have a purpose anymore so we’re shifting gears. We thought of doing something more urban so we decided to do some food trucks instead.”