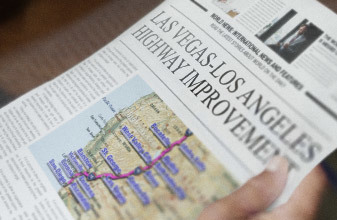 “Immediate relief” has been promised for the long-dreaded congested drive on Interstate 15 from Las Vegas to Southern California, including Los Angeles and San Diego.

Gov. Steve Sisolak of Nevada and Gov. Gavin Newsom of California said that about $12 million is going into a project to temporarily expand the five-mile stretch of the southbound roadway from the California-Nevada stateline to the California Department of Food and Agriculture Station to reduce the bottleneck that occurs as the highway narrows from three lanes to two when entering California.

The California Department of Transportation will repave and restripe the shoulder of the roadway so that it can be used as a third southbound lane during peak congestion times, usually Sundays and Mondays. This is among the most congested stretches of the highway that has holiday weekend traffic backed up more than 20 miles from Primm to the Las Vegas suburbs.

Sisolak commented, “It’s going to go a long, long way toward, one, cutting down on the time to travel, and two, making it safer for people. It’s long overdue.”

About 10 million people visit Las Vegas annually from — and later going back to — California via I-15. Travel times on Sundays and Mondays for the 113-mile stretch from stateline to Barstow average between three and five hours, and there are times when the normally 4.5 hour trip from Las Vegas to Los Angeles takes 10 hours or more.

It is believed that most California-based advantage players fly to Las Vegas rather than drive, but with the recent lack of availability of rental cars in Las Vegas, that may be changing.

A Las Vegas Convention and Visitors Authority spokesman recently said, “This initiative is an important first step that will begin to improve the experience of the 10 million visitors to Las Vegas who use this corridor. We know this will be exciting news celebrated by all who drive I-15 during peak travel times.”

The project is expected to be completed by the summer of 2022, Newsom said. More long-term solutions such as a permanent third lane will be discussed, he went on. “There’s a deep urgency for us to meet this moment. We’re not passively interested in trying to episodically solve this. We’re here for the long haul. We want to get this fixed. And I made that crystal clear to my team,” Newsom said.

A lot of long-term hope depends on Brightline West, the planned electric, high-speed rail project that will eventually run between Las Vegas and Southern California. But that project is years away, and the company has said it’s not clear when it will even break ground. Many observers think it is a pie-in-the sky idea that will never get built, and will not be used much if it is. Sometimes dubbed the “train to nowhere,” it has been a political and financial football for years, with many promoters and government officials jumping on and off the bandwagon at different times. But other solutions will take time to hash out as well, with serious concerns that need to be addressed along the way. But the temporary plan will address “a long-standing issue that, candidly, has not been addressed for years and years and years,” Newsom said.

Las Vegas Mayor Carolyn Goodman has been loudly calling on California and federal officials to develop a fix to the traffic problems.

Newsom said that when asked (by Sisolak) about the California side of the border “What is Caltrans going to do?” The answer was that we have nothing prepared. “That all changed when the governor (Sisolak) made the call a few weeks ago, rather than complaining about it, rather than putting press releases out about it,” Newsom said. “You actually picked up the phone and asked if there was something we could do. That’s rather novel in today’s political climate.”

Sisolak said, “People put out a lot of press releases and there’s a lot of complaining about the issue. I believe in trying to get something done as opposed to complaining. That’s why I picked up the phone and called Governor Newsom.”

The details of how the temporary third lane will operate, such as what will be considered “peak hours” and how first responders will efficiently get to emergencies when the shoulder is being used as a travel lane, will need to be determined, he added.