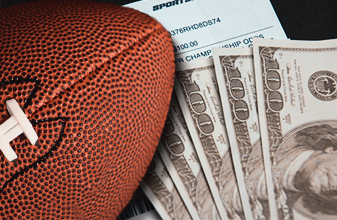 Look closely at the (American) football listings in any sportsbook and you will find a lot of information. The teams are listed in pairs, and the bottom team by convention is the home team.

The number to the left of the team’s name is the unique number assigned to that team to avoid confusion when you bet.

The number giving the spread will be next to the team that is the favorite. That number is understood to be a negative number, though to save space the board might have eliminated the negative signs.

The number giving the total will be next to the name of the underdog.

Sometimes to save space, half points are shown as an apostrophe, called a hook. Thus Rams 5’ would mean the Rams are favored by 5.5 points. A bet on Rams against the spread would be Rams -5.5.

The money lines are for bets on which team will win with no points given to either team. You might see, for example, Philadelphia Eagles +160, New York Giants -180.

Besides numbers for betting upcoming games, the boards sometimes also list odds for winning conference titles and division championships. You can bet on which team is going to win the next Super Bowl. These wagers, on events whose outcome may not be decided until a date considerably in the future, are called futures bets

Excerpted with permission from Sharp Sports Betting by Stanford Wong.